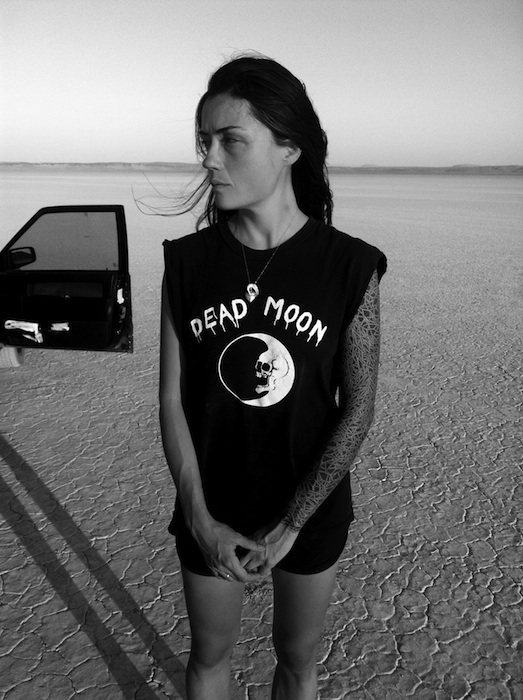 Fri 1 THE HAGUE, REWIRE FESTIVAL
Sun 3 LISBON, TEATRO MARIA MATOS (co-presented by ZDB)
LISTEN TO ‘HOLDING’
https://soundcloud.com/kranky/grouper-holding
LISTEN TO ‘CALL ACROSS ROOMS’
https://soundcloud.com/kranky/grouper-call-across-rooms
WATCH ‘MADE OF AIR’
http://vimeo.com/109943175
About the album, Liz Harris explains in her own words…”Ruins was made in Aljezur, Portugal in 2011 on a residency set up by Galeria Zé dos Bois. I recorded everything there except the last song, which I did at mother’s house in 2004. Iʼm still surprised by what I wound up with. It was the first time Iʼd sat still for a few years; processed a lot of political anger and emotional garbage. Recorded pretty simply, with a portable 4-track, Sony stereo mic and an upright piano. When I wasnʼt recording songs I was hiking several miles to the beach. The path wound through the ruins of several old estates and a small village.”
“The album is a document. A nod to that daily walk. Failed structures. Living in the remains of love. I left the songs the way they came (microwave beep from when power went out after a storm); I hope that the album bears some resemblance to the place that I was in.”
“Strangely affecting. Factor in some brilliant shards of melody in songs like ‘Clearing’, ‘Call Across Rooms’ and ‘Holding’ and ‘Ruins’ becomes an unexpected gem that rare album that reels you in without even trying.” – NME [8/10]
“This album demonstrates perfectly her gift for taking a handful of elements and forging something deeply affecting from them. This is by no means the first time she’s displayed this talent, but Ruins is one of her finest works, full to the brim with emotion in spite of the aching space at its heart.” – FACT
“A deep and beautiful pathos pervades ‘Ruins’, as Harris contemplates the notion of a beginning as already implying its ending. That sense of absence pervades in these uncharacteristically sparse, though consonant tracks, meant to be absorbed as a single album, rather than several unrelated tracks…And as quickly as the album emerges it disappears, like the memory of star that died long before we saw it.”
– DUMMY, ALBUM OF THE WEEK

“Even here in their barest form, removed from their usual dreamlike production. Harris’s spellbinding songs, still feel beautifully half-hidden, buried in black space.” – MOJO
“Listening to Ruins is to eavesdrop, to find yourself outside the window listening to Harris’ heart breaking via a spine-tingling sequence of fragile, tentative ballads….Holding uses some subtle multi-tracking to add depth to the most gorgeous melody Harris has yet written.”
– NARC
“A typically resourceful, subtle and mesmeric addendum – and one that underlines just how consistently excellent an artist Harris has been.” – MUSIC OMH
“Forever albums become fewer and further between the older you get. No new record will ever quite impress, with lasting power, like those heard at a time where every other riff sounded fresh, each iteration of a band’s career a leap into a glorious new world of sparkling sounds and iridescent imagery. The music of one’s youth, the soundtrack to teenage memories: it never dulls. ‘Ruins’ feels like it might be a forever album.” – CLASH MUSIC

“The minimal aesthetic Harris masters here envelops the listener in a blanket of melancholy warmth.” – SOUNDBLAB [9/10]