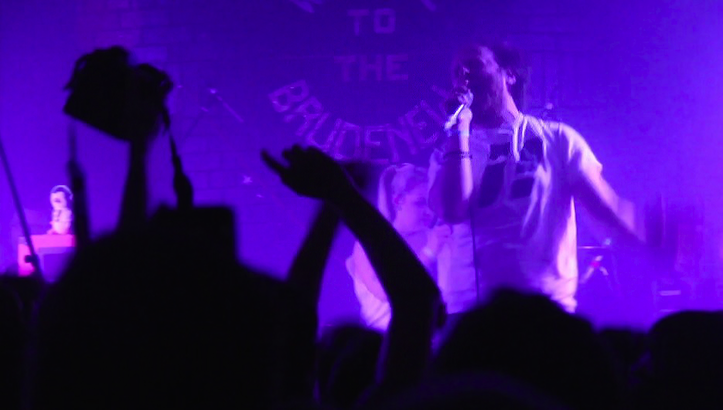 ¡Forward, Russia!  LIVE AT THE BRUDENELL

As part of the celebrations for the centenary of the Brudenell Social Club in Leeds, ¡Forward, Russia! decided to reform for ‘one last gig’ after almost six years apart.

The band, combining elements of art rock and punk, achieved critical acclaim with their 2006 album ‘Give Me A Wall’ and were among a number of bands from Yorkshire who gained the attention of the national music press around this time.

Known for their awkward, numbered pop songs and matching t-shirts, the band toured relentlessly and built up a loyal following.

After unexpectedly splitting in 2008 without a farewell tour, the Brudenell’s manager convinced the band to perform for the 100th birthday celebrations in late November 2013.

What followed was weeks of rehearsals and relearning songs after the gig sold out in less than 24 hours.

A small camera team filmed the band as they prepared for the show at the legendary venue, resulting in a short documentary capturing what was a memorable night.

¡Forward, Russia! Live at the Brudenell from Tom Airey on Vimeo.

The film, released exactly a year on from the gig, features interviews with the band, fans, other bands and people who played an important part in the band’s development.

Tom Woodhead, singer in ¡Forward Russia!, said: “The Brudenell 100th anniversary gig was one of our favourites as a band. The atmosphere was perfect due to the distillation of pretty much everyone who cared about our music all in that room.

“The film captures that atmosphere perfectly and we’re proud to have been part of it”.

Appearing in the film, BBC 6 Music’s Steve Lamacq said: “There is still, all these years later, no band that sounds like ¡Forward Russia!, and that was the great thing about them. I think that stands as a real testimony to why we like them.

“At a time when the music industry was spiralling out of control, there was this little oasis of sanity in Leeds which was built on the old DIY ethics.

“The whole Leeds scene at the time was really good and really stood for something – it was everything London wasn’t really.”

ESYA (Savages/Kite Base) shares new single ‘Nothing’, announces new EP ‘Absurdity of ATCG (I)’ due 24th May + UK live dates