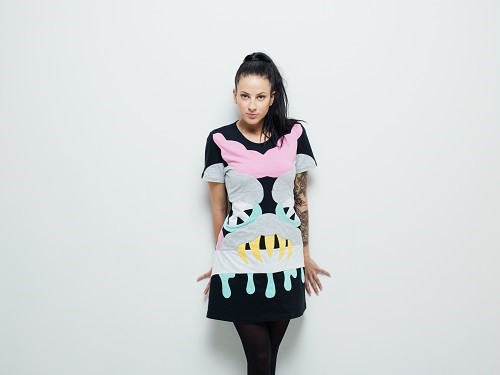 Finnish alt-pop artist Ronya is proud to announce her new single, ‘Work Harder’  through Cocoa Music.
Widely regarded as one of the leading female voices in her native country, Ronya began her career with Warner Music Finland, having been signed to the prestigious label at the tender age of 16.
Following the release of her 2012 debut album, ‘The Key Is The Key’, she went on to sign with independent Helsinki-based label Cocoa Music in 2013. Home to a rising breed of exciting artists and a strong focus on creating stunning music videos, Ronya had found the ideal team to help perfect her sound.
Having released the hypnotic single, ‘Flame’, in February this year, Ronya now returns with a track that aims to showcase a more colourful and present side to her artistry.
With infectious 80s pop elements aplenty, ‘Work Harder’ is a throwback to the classic female-fronted pop song, with pulsing basslines and hypnotic synths playing a major part in telling the story.  While twanging guitars and shimmering drums call to mind the likes of Robyn and HAIM, the stripped-back nature of the track allows Ronya’s powerful vocals to soar throughout, providing the perfect platform for her to convey its poignant meaning.
“’Work Harder’ is a reflection on my journey as an artist and an individual – but most importantly it’s a reminder to myself and to anyone working towards their goals and dreams: keep going no matter what – it’s only the beginning,” says the 23-year old.
Having written and performed original songs along with jazz and R&B covers at local venues in her hometown of Helsinki since the age of 12, Ronya’s diverse influences are tangible in her music, which manifests itself in a mystical Scandinavian vibe.
Since the release of ‘Flame’, Ronya has teamed up with various producers to hone her sound, with a full length album due to be released in early 2015. If this spellbinding single is anything to go by, it promises to be a phenomenal year for the Finn.