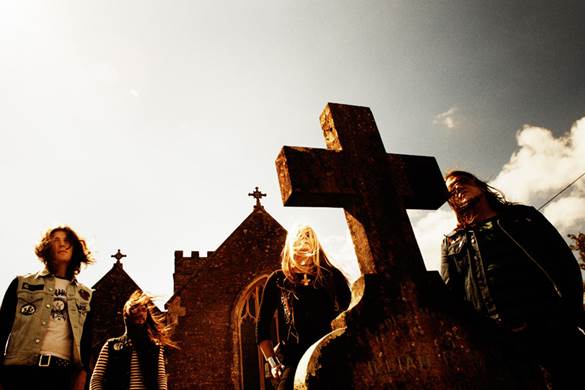 Electric Wizard have announced a headline London show for 2015, set to take place at the Roundhouse in Camden on May 15th.

This very special one-off event follows in the wake of the UK outfit’s most successful album release to date in the form of ‘Time to Die’ – the eighth EW full-length record and their first to be released via Spinefarm Records; issued worldwide in late September of this year, ‘Time to Die’ saw The Wizard achieving their highest ever chart positions around the globe, entering the US Billboard Top 200 at No. 64 and topping the Billboard Vinyl Chart.

Tickets for the Roundhouse go on general sale at 10am on Friday December 11th via www.roundhouse.org.uk / www.kililive.com

Details of the full bill will be revealed in due course.

Prior to the Roundhouse show, the first time the band have headlined this historic venue, EW will release a new single; titled ‘Lucifer’s Slaves’ and taken from the ‘Time to Die’ album, this release (the follow-up to the ‘SadioWitch’ single / video) will be available on 10” vinyl & download, complete with exclusive artwork designed by the band themselves plus previously unreleased material.

In addition to this, Electric Wizard will appear at the CTM 2015 – Un Tune ‘Festival For Adventurous Music & Art’, due to take place in various venues across Berlin from January 23rd to February 1st.

As detailed on the official festival site, “CTM 2015 – Un Tune aims to engage with the direct bodily effects of frequencies, sound and music, as well as these phenomena’s synergistic effects with other sensory stimuli. Artistic experimentation with the affective and somatic potential of sounds and frequencies opens up possibilities of tuning and de-tuning the composite that interconnects body, matter, energy and (musical) machines – and of exploring our perception”

Clearly, the ideal event for Electric Wizard, whose ‘frequencies’ and ominous vibrations, especially those at the lower end, have been known to re-arrange internal organs.

Tickets and further information can be found at the following link: http://www.ctm-festival.de/festival-2015/ctm-2015-un-tune/

For those on the other side of the Atlantic the band say news on their first US tour in 12 years will be announced in the coming days.

According to The Guardian, “Lots of bands make claims to be the heaviest of all, but only Electric Wizard really qualify for the title. Masters of crushing doom metal and sinister B-movie kitsch, the British veterans are more popular than ever right now, and new album ‘Time to Die’ looks certain to be their biggest to date. A slow-motion, Sabbathian horror show thrumming with drug-ravaged psychedelic menace and bulging with hypnotic riffs.”

‘Time to Die’ is available via iTunes hereand via Amazon here.

“The most uncompromising album of the year” – Mojo 4/5

Electric Wizard prove that sometimes in order to achieve perfection, all you need is hate” – Kerrang! KKKKK

“… both atmospheric and immersive in the extreme” – Record Collector 4/5