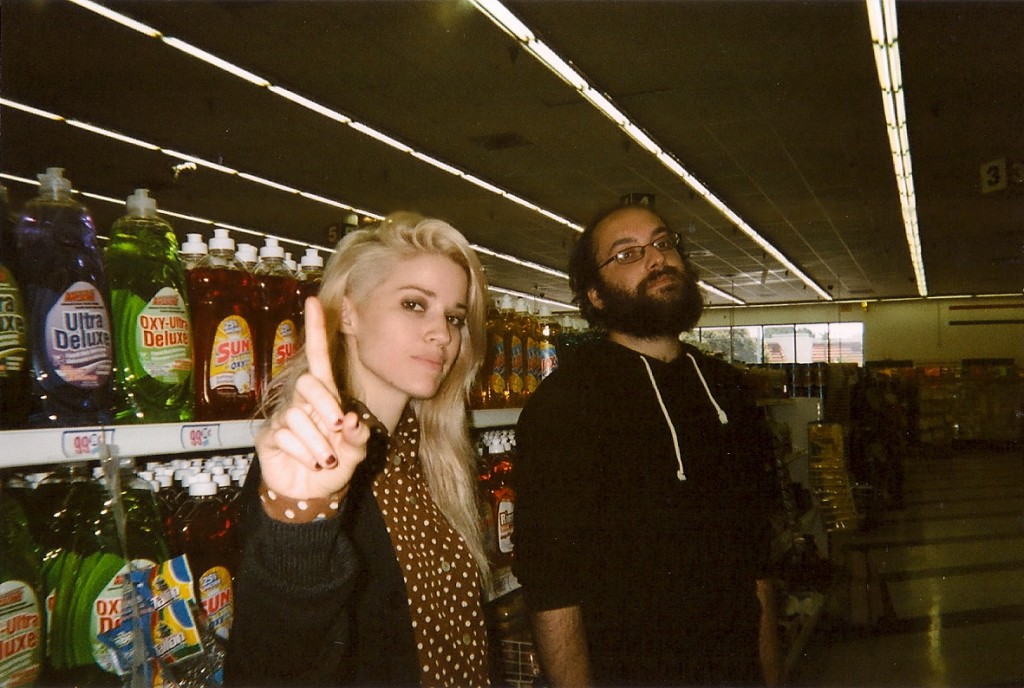 Los Angeles by way of Boston duo Dirty Dishes are getting ready to release their long awaited full length debut Guilty on January 27th via Exploding In Sound Records. This week Stereogum premiered the band’s new single “Red Roulette,” saying “Dirty Dishes takes that [90’s] stereotype and runs it through layers of distortion, forced into the background by Alex Molini’s unflinching synth lines and rendering any creeping desire to describe the band’s sound as “sludgy” or “fuzzed-out” null and void” before concluding with a definitive “comparison would be a disservice”.

There’s a great deal of sonic wonderment unfolding on Dirty Dishes new album, from blistering shoegaze to eerie slowcore, the band use their full length to stretch out ideas and moods. After two extremely well received EPs, the once Boston quartet uprooted to Los Angeles, and began life as a duo with their current line-up of Jenny Tuite (guitar/vocals) and Alex Molini (bass/synth). Though they may have moved coasts and minimized band members, Dirty Dishes’ music continues to grow bigger and exceedingly layered. The band have created a massive and soaring indie rock album combining the Dishes’ most serene and chaotic moments, offering a blissful wall of sound that crawls forward as often as it explodes. Doom and gloom unfolds side by side with shimmering bursts of catchy noise pop.

Earlier this year the band shared singles on Impose and Earmilk, with the former stating, “their first track since relocating to the sunny side of the country, shows that the UV and Vitamin D hasn’t gone to their heads, rocking the track with a plucky bass groove that opens up into a distorted sprawl.”

Dirty Dishes are the latest LA-based band to come out with a mix of punchy, feedback-drenched anthems that would make the ghosts of the 90s proud.  The band formed when singer/guitarist Jenny Tuite had her shoes puked on at a party one night by then-stranger & synth player Alex Molini. Feeling bad about his belligerence and overall lack of general etiquette, Alex contacted Jenny the next day and offered to buy her a new pair of kicks.  The new shoes never ended up coming to fruition but instead the pair formed a band together.  The band released their self titled debut EP in January of 2010, a benchmark of Boston’s indie scene at the time, the quartet played countless shows, earning a reputation as one of the cities best bands. They followed the record with 2012’s The Most Tarnished Birds, expanding on their sound and smoothing some of the jagged edges (though certain not to sand them down completely). The band moved to LA shortly afterward, bringing their apocalyptic indie rock songs with them to a new coast and new audiences.

Guilty is a welcome return from a great band that is primed for a big impact. Their sound is as destructive and haunting as it is captivating and sonically rich.
Guilty is due out January 27th, 2015 via Exploding In Sound Records on vinyl and digital. Pre-orders are available HERE.