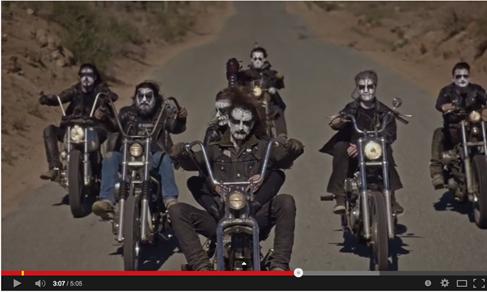 7th LP Afraid of Ghosts Out 2nd Feb via Lojinx

“Bed on Fire” is a sulky meditation on groundhog day love where he revels in a scorching solo, swelling strings, and Walker comes off sounding just the right amount of tortured.” – VICE’s Noisey

Butch Walker‘s highly anticipated seventh full-length album Afraid Of Ghosts, produced by Ryan Adams, will be released on CD, LP & digital on 2nd February via Lojinx in Europe. Following the understated infectiousness of “21+” and title track “Afraid of Ghosts,” Butch delved into deeper and grittier territory with his sultry single “Bed On Fire,” recently shared online. Now, he unleashes the song’s spellbinding visual companion, filmed in Joshua Tree, California, and directed by Magdalena Wosinska and Snake. Their “Bed On Fire” mini-film has a woozy, dreamlike feel whose narrative staggers from biker gangs in sprawling desert vistas to corpse-painted attackers at a party. The visual metaphors serve to transform the track from siren song to murder ballad, albeit one in which the corpse-bride exacts her bloody revenge. This cinematic, warped Western that stars three generations of Walker men – Butch, his father “Big Butch” (snapshot in the truck), and his son Jamie Blue – is not to be missed.

Butch said of the video, “It’s a wild ride so buckle up. Hope you enjoy it as much as we enjoyed making it. Enjoy the madness.“

Afraid of Ghosts was produced by recent fellow GRAMMY nominee Ryan Adams at his PAX AM Studios in LA along with friends & special guests including Bob Mould and Johnny Depp. The album is available on iTunes, and pre-order includes 4 instant-grat tracks. With his remarkably diverse resume that includes everything from guitar god to GRAMMY and CMA nominated producer, Walker’s new LP shows both skill and tenderness.

Check out the trailer for Fireworks’ "Arrows" video which will premiere online this week! Catch Fireworks on tour now with Polar Bear Club, Balance and Composure, Make Do and Mend and Such Gold [News+Video]