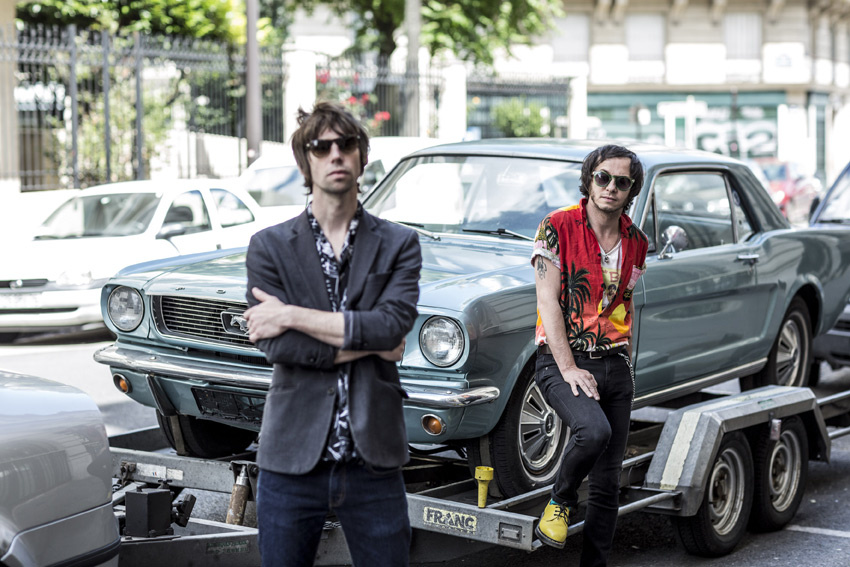 TAKEN FROM THEIR GOOGOO EP RELEASE TODAY VIA BLEEPMACHINE

“Slightly seedy, effortlessly gorgeous, sun-kissed whistle-pop that sticks its middle finger up to the changing of the clocks.” – DIY

“For those who believe that garage rock, acid punk and freakbeat are more than just handy reference points.” – Clash

Googoo was the first song written and recorded by Bosco Rogers. It’s an invitation to love. An ode to rich girls, booty calls and onanism from the viewpoint of a
hopeless romantic. It may or may not be based on a true story.

Their new lo-fi video, directed by frontman Delphinius Vargas, sees the duo in a pure tongue-in-cheek, DIY aesthetic on a similar path to classic, old videos seen on MTV.  The dogma is rigorous: one green screen, one take, no edit. It cost a staggering £18 (for the green screen material) and was recorded on an iPad.

Taking inspiration from bands like The Monks, The B-52’s and Guided By Voices, Bosco Rogers’ debut Googoo EP is loaded with a dose of 60’s psychedelic rock, new wave and proto-punk. The duo Barthélémy Corbelet and Delphinius Vargas, met one fateful night in a London boozer, Sambuca was slammed, friendships were formed and our love story begins.

All songs were written, composed, produced and recorded by Barth and Del. Mixed by Jonathan Gilmore at Livingston Studios (London) and mastered by Robin Schmidt at 24-96 Mastering (Karlsruhe). The cover art was created by Robin Eisenberg, also known as Crocodiles’ keyboard player.

The band play live in Hastings tonight, December 1st at the Dragon Bar in Hastings, 71 Robertson Street, TN34 3EE. Free entry for everyone.

Googoo EP is made up of four tracks and available now from iTunes via Bleepmachine.

SUNN O))) REVEAL THE SUPPORT ACTS FOR THEIR SUMMER SHOWS