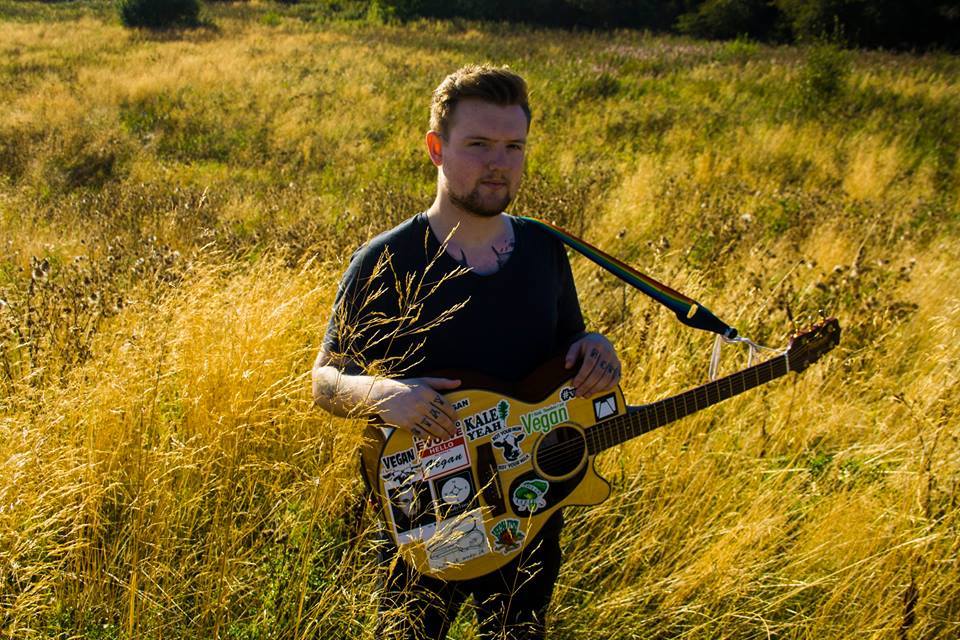 At the beginning of this year we fell in love with a Leeds based singer/ songwriter who we quickly introduced to the site, and to the readers. James Carroll specializes in acoustic Math Rock and Emo. Twinkly jams to make those tear ducts flow. James released his debut stunning full length Precarious Position at the end of last year. This album following the release of his EP entitled “Finally Over You” quickly established him as a mainstay of the English emo scene. With lush, full instrumentation, intricately beautiful guitar-work, delicate vocals and poetic lyrics, James made his mark on Precarious Position.

Fast forward towards the tail end of 2014 and James, who has been working non stop all year, is back with another flawless effort in his new 4 track EP Disconnect Yourself From The Machine– out now and available via our favorites in  Little League Records.

Before we get to the details of the recently released EP, we want to get to know more on James. We are delighted to spend some time chatting to him to discover more.

Before we get to the details of your recently released EP, we want to get to know more on you- You’re no stranger to Circuit Sweet but for our readers we’d like to discover more about you. Firstly how long have you been playing and performing live?

Hello there, well I really started messing about on the guitar roughly around 2010 in secondary school. It wasn’t until I went to college though where I took it more seriously. What was it that first got you to pick up your instrument- and then to write your own compositions and direct your creativity through your own songwriting?

I’ve always been fascinated in creating music since the day I somehow managed to have a laptop with music production software on, however the time when I realised I was songwriting would have been just before I went to college mid-2010. What is it from life that triggers your creativity to project your unique style?

A lot of triggers have varied In the past four years or so, but I guess my earliest stuff was about girls, sadness and such (cliché as it sounds). However more recent stuff contains more issues about the world around us and my beliefs put into a creative form, still on the sad side of things a bit. How would you describe your own sound (in no more than 5 words).

Melancholy, a bit like Morrissey Your vocal style if often compared to the likes of Owen, how does this make you feel?

Well that makes me feel rather good, since being a huge influence on me I’m not surprised it is compared to (but not as great as, obviously) Mike’s voice! You teamed up with Little League Records at the end of 2013 for your debut album release and again for your new EP- how did this involvement come about?

A friend of mine pointed me to Callum’s direction and we got chatting on Facebook, one thing lead to another and he was setting up my first release with Little League Records before I knew it! I presume you’ve had many offers/ interest to your talent and releases before what made the charming Little League the right home for your efforts.I wish! Alas, Little League Records have been the only place I felt comfortable with and had trust in. Callum goes out of his way to do the best for each individual artists and I think that is lacking nowadays in a lot of labels. Looking back on your debut, are you proud of what you achieved?

I’m proud of the fact I actually managed to create nine tracks and put them all together into one thing, I never thought I would be able to do that so I guess I am a bit proud then. With regards to your new EP– we would love to know the ins and outs on this beautiful release. Describe your writing process and how you’ve managed to get to this standout effort

I’d like to say this is a turn in a new direction for me; I wanted to try and push the boat out with my songwriting. I spent more time crafting each track so they would all link to each other in some way or the other, I’ve been listening to a lot of Prog Rock and really wanted to incorporate some of the elements used in that style into my own music. The biggest thing I took from that would be the idea of using a concept as the focus of the music; I class this EP as an concept EP in its own way. From the writing process, the recording process followed -Tell us a little about your recording for the EP, did it differ to the debut and if so why?

The biggest difference from the debut when talking about recording will have to be the fact that this is the first time I’ve been in a studio working with a producer. Everything else prior to this EP has been done in a bedroom with one microphone, a single speaker (which was limited to only the left channel) and budget headphones. I wanted to record a full band style record in a professional manner, so I approached the amazing Bob Cooper and recorded it all over a few days in Manchester this year. What do you think the new release captures?

The concept of separating oneself from a Matrix-like lifestyle what we call modern society. Have you got many live shows booked at the moment to support the release?

Not currently no, I know I should but I’m focusing on my final year of university and trying to make my parents proud (and myself to that matter). What do your live sets consist of- sell us your show!

Emotion, shear emotion whether that be anger, joy, confusion, disappointment or insanity. Take your pick! I try to be humorous and happy but it kind of contradicts some of the music I play so it’s an odd combination to say the least. Is there a particular track you just love to play?

“I Fucking Hate Myself and I Want to Die” is my favourite to play, just for the shock factor of introducing the song title. We wish the best from the EP release but for now enlighten us to what can we look forward to from you in the future?

Stay warm this winter, it’s going to be a cold one!

James, it was a pleasure.

James Carroll delivers yet again with a concept EP about love, loss, and isolation. His vocals, reminiscent of fellow Brit Tobias Hayes, are surrounded by masterful arrangements. Carroll switches effortlessly between strummed and tapped guitar in the style of A Great Big Pile of Leaves and ttng, with an acoustic twist.- LLR