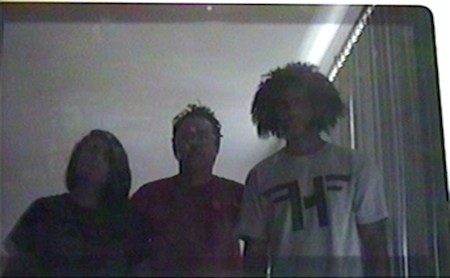 True Neutral Crew, the group that ties together the many divergent musical talents of the Deathbomb Arc roster, has dropped a short film to share the important visual aspect of their project. Musically, True Neutral Crew includes the talents of experimental rappers Daveed Diggs (clipping.), Signor Benedick The Moor, and Margot Padilla (I.E.) accompanied by the production of noise & electronic artists Brian Kinsman (ex-Foot Village/Gang Wizard), Boo Hiss (ex-Books on Tape), and tik///tik. With so many involved, their live show is designed for flexibility, accommodating performances for whatever assembly of artists are available at any given show. How? Through the use of Rainbow Reapers.

Exactly the reason this film was made; because you need to see it to really understand. Filmed by Cristina Bercovitz (director of many clipping. music videos) and edited by Benjamin Shearn (director of the 100% Silk documentary), this film is a model of what True Neutral Crew do live.

True Neutral Crew brings together the strengths of three distinctly different musicians. Brian Kinsman of Foot Village (Northern Spy / Fat Cat / Upset The Rhythm) plays streamlined forceful drums. Margot Padilla of I.E. (Deathbomb Arc) composes cold and meticulous power ballad drones. Daveed Diggs of clipping. (Sub Pop) flows with a quickness both ecstatic and heartless at the same time. On their debut mixtape #MONSANTO they participate in a rap tradition of playing the villain. But there are no drug dealers or pimps here. Rather, something completely void of even street heroism: Illuminati, CIA agents, and, of course, Monsanto CEOS. Adding a huge krautrock influence to their work, the results are more outside of any genre than in. The focus is tone, texture, and teamwork. Even if for an evil cause.