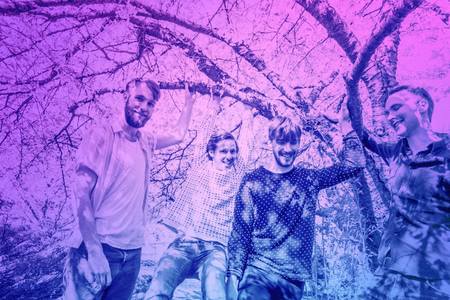 ”It was Theo-mania in the record stores of Tokyo” – Theo Berndt is back with new single!
No, it’s actually not a tabloid headline. It’s how Theo Berndt put into words their career groundbreaking tour of Japan and China in 2013.  The band’s latest effort at the moment, full length album “F.E.A.R.S.” was released through This Time Records in Asia to critical and commercial acclaim. The band did hysterical record signings and sold out shows in Tokyo.
Apart from success in the Asian territory Theo Berndt has had a good run at Swedish college radio and has been playlisted at national P3. They’ve toured through Europe and played all major Swedish festivals.
The new single, “Atomic”, already spinning on national radio in native Sweden, is the first new release in two years; mixed by Andreas Söderlund (Niccokick, Hello Saferide) and recorded in hometown Gothenburg by Anders Lagerfors.
”Atomic” is released worldwide by Birds Will Sing For You Enterprises/X5 Music Group on November 12th, excluding Japan. Japan release through This Time Records on November 26th.