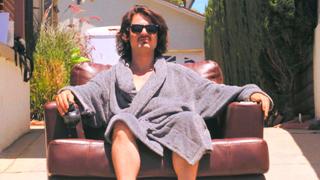 Watch Taylor Locke shave, play tennis and be chased by naked women – and more! – whilst piloting his couch around the streets and sidewalks of his native Los Angeles.

“As soon as I set my eyes and ass on a couch car, I knew it would be the only form of transportation that I’d ever need to make a music video about,” says Taylor.

“Running Away From Love” is the debut single and video from Taylor Locke’s forthcoming album. “Time Stands Still” is the first solo offering from the ex-Rooney guitarist and vocalist Taylor Locke and, despite its title, the record is a testament to creative momentum and personal growth for Locke. While it’s Locke’s first release as a true solo artist, it’s not your typical singer songwriter fare.

“I think the term ‘singer-songwriter’ sadly evokes a white guy in a coffee shop strumming a fucking g-chord all day,” explains Locke. “I think this record sounds more like a band record… the band just takes occasional smoke breaks.”

“Time Stands Still”, the album, will be released in Europe on CD, vinyl & digital formats in early 2015 on British indie label Lojinx.

In the meantime enjoy Taylor’s summery pop gem while he cruises the streets in his highly enviable, if not entirely street-legal, motor comfort zone. “Running Away From Love”, the single & video, is out now.