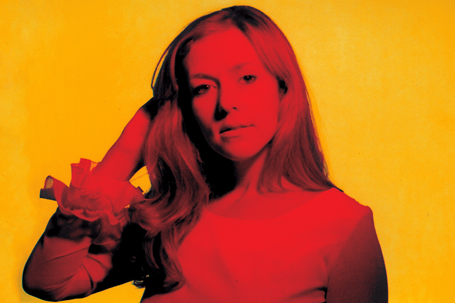 “Springtime Carnivore’s debut album is meant to be blasted on a hazy weekend afternoon when the sun is beaming through your window creating those little dust specks in your apartment while you dance around in your underwear making eggs (spatula in hand). It’s an album you can listen to year-round, despite the upbeat summertime drum kicks and whistles that are weaved throughout all fourteen tracks.” – Noisey
On the heels of a great first CMJ, Springtime Carnivore (aka Los Angeles-based Greta Morgan) continues on the road with Generationals in support of the release of her dreamy self-titled debut, out today on Aquarium Drunkard’s Autumn Tone Records. Produced by Morgan and Richard Swift (Foxygen, The Black Keys, The Shins), the album crackles with warmth; the songs are built on a foundation of classic folk and pop songwriting, synthesizing those roots with capricious production that turns and careens unexpectedly, casting her melodies in varied light and from surprising angles. Listen to the inviting album of ebullient pop now via Noisey and watch the homegrown video for “Name On Matchbook,” directed by Bryce McGuire. Morgan describes the story behind the video below.

WATCH “NAME ON A MATCHBOOK” VIDEO

“I had read an article that Neko Case wrote about the lack of male groupies for female artists, which totally lit up my curiosity, right around the time that Bryce McGuire pitched the video treatment. The stars just sort of aligned to make this video happen after that. Bryce and I watched a ton of Beatlemania footage to prepare mentally and we were amazed at how many men signed up excitedly to be involved as our groupies. The video went very smoothly, other than one disaster — breaking the windshield of our borrowed car which served as the band vehicle.  It is actually terrifying to be swarmed by a crowd of men! It’s like a stampede.” – Greta Morgan