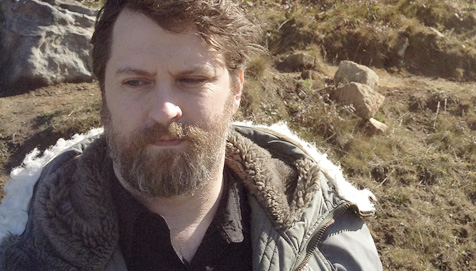 SIX ORGANS OF ADMITTANCE TO RELEASE A NEW ALBUM IN FEBRUARY 2015,
BASED ON A SYSTEM OF MUSICAL COMPOSITION DEVISED BY BEN CHASNY
Six Organs of Admittance‘s Ben Chasny has devised his very own system of musical composition, The Hexadic System, which is the basis for an upcoming new album, entitled Hexadic and to be released on Drag City in February 2015.
How The Hexadic System came to be…
Ben Chasny‘s restless intellect has regularly guided the progress of his creation. A lyrical mastery of acoustic finger-picking would be enough to build a body of work for most musicians; this is just the stepping-off point for Ben. From the earliest days of private-press psych home recordings, Six Organs of Admittance has sought out alternative spaces in which to make music and challenge audiences to keep up with his rapid advances into new terrain. Over the last two years Ben has been assembling a comprehensive system of musical composition. Designed to free sound and language from rational order and replace calculation with indeterminacy, The Hexadic System is a catalyst to extinguish patterns and generate new means of chord progressions and choices.
Though it was not his intention upon creating this unique system, the structures it was generating were so compelling, they soon became the bones of the next Six Organs record.  This is the longest time between Six Organs records since Ben started making them in 1998. This is also why Hexadic sounds unlike anything else made this year, and generally unlike most other things made ever.
The System builds all of the tonal fields, chord changes, scales, and lyrics on Hexadic, creating the framework of the songs that the musicians engage with. Yet the System is open; within the framework, Chasny‘s own personal aesthetics – such as the production mode of loud guitars, the order of songs, the editing of length, were all conscious decisions made to communicate the pieces. The exact same combinatorial patterns used on this record would generate infinite results, depending on the choices of the individual. Ben‘s years of study have produced an operational agent that has not only built all the songs on Hexadic but is also a system anyone can use to restructure their ways of habit.
With a desire to provoke the unconscious and spring past the structures and limits of the conscious mind, this was the goal: to use the System to make heavy music with as few “heavy” signifiers as possible. The ones that are left: Volume. Distortion. Impact! This is Hexadic: the sound of the System in the hands of Six Organs of Admittance.
TRACK LIST:
The Ram
Wax Chance
Maximum Hexadic
Hesitant Grand Light
Hollow River
Sphere Path Code C
Future Verbs
Vestige
Guild
We shall reveal more insight into the resulting music in the coming weeks, including more about the other musicians who feature and an audio preview of Six Organs’ Hexadic sound. Additionally, we’ll have information about how you can practice The Hexadic System in your own home, via a deck of specially-created cards as well as a book explaining the workings of the System.
http://www.dragcity.com