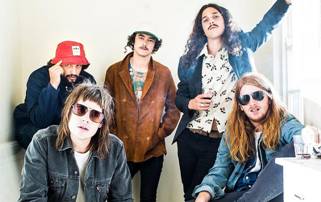 This is a band who inspire fervour, who are hosting a party instead of playing a gig, and who generate deafening sing-alongs in a way I haven’t witnessed since the Gallagher’s in their prime.” Temple of Noise

Australian psych rock band Sticky Fingers head to the UK this November to play a series of tour dates following the August release of their critically acclaimed sophomore album ‘Land of Pleasure’.

The five-piece exude confidence and energy, and emphatically mix rock and ska in equal measure to produce a sound like no other. Their latest release introduces nuances of dance and drum ‘n’ bass, intertwining the genres to create a deadly concoction of thumping material. Having received widespread acclaim across their native Australia – with Society of Sound awarding ‘Land of Pleasure’ a rating of 9/10 – Sticky Fingers promise to bring the roof down on their upcoming UK expedition.

The Australian collective commence the tour on the 21st November at The Duke of Cumberland in Kent, and then proceed to the capital the following night (22nd) to play The Garage. One of London’s most iconic venues, the band will be in good company, with stage alumni including the likes of The Charlatans, JAWS and Clean Bandit in recent times. After their London showcase, Sticky Fingers head further south to play the seaside town of Bournemouth, with a show-stopping performance set for The Winchester on the 23rd November. Finally, they make the journey across the M4 to Wales, to end the tour in style at The Full Moon in Cardiff on the 24th November.

Sticky Fingers first garnered attention by unofficially headlining a festival from an improvised stage built in their adjoining backyard. Having dropped their debut album ‘Caress Your Soul’ in 2013, with multiple charting singles and dual spots on the JJJ Hottest 100, since then the band has been steadily selling out shows all over Australia and Europe. They last graced UK shores back in May, which included a blockbuster appearance at Europe’s leading music festival for new music – The Great Escape in Brighton.

Sticky Fingers make unashamed party music and their gigs match that vibe, with feel good songs a signature of their explosive sound. Bringing the Australian sunny spirit to banish the chill of those November nights, the Sticky Fingers tour looks set to be a truly unmissable event.