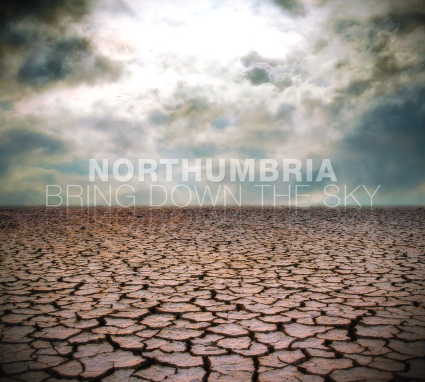 On November 21st Belgian experimental label Consouling Sounds is releasing the sophomore full-length Bring Down the Sky by Toronto-based ambient metal band Northumbria. Forming in 2011 from the ashes of Holoscene, Toronto/Northumberland based musicians Jim Field and Dorian Williamson came together to create Northumbria and in turn craft sweeping, improvised drones which combine their personal influences and individual soundscapes in order to manifest an aural journey into a dystopian wasteland.

Using only guitar and bass and recording their work completely live, Northumbria released their debut in 2012 on Montreal’s TQA Records, which began their sonic expanse into the consciousness of the music appreciating public.
Northumbria was recorded in the sanctuary of a 19th century church in Northumberland County and the resulting compositions are imbued with the ambience of the setting as well as a stately grace, something that permeates all their following work.

2013 saw Northumbria issue a remix project – All Days Begin as Night – on Altar of Waste Records, which featured new takes on original pieces and was contributed to by peers – Theologian and Aidan Baker among them.

A split with North Atlantic Drift followed as well as a wonderfully received video for the track Black Sea of Trees. Northumbria have also featured on a number of online mixtapes and have curated their own for CVLT Nation. Recently the band performed a live set for Darkfloor Radio and the future looks to be both busy and bright.

Northumbria will be performing in Toronto on December 11th at the Garrison with Gates and Dirty Inputs, to celebrate the release of Bring Down the Sky.

1. Transcendence
2. The Ocean Calls us Home
3. Ostara
4. The Silver Forest
5. Bring Down the Sky

Streaming in its entirety here-