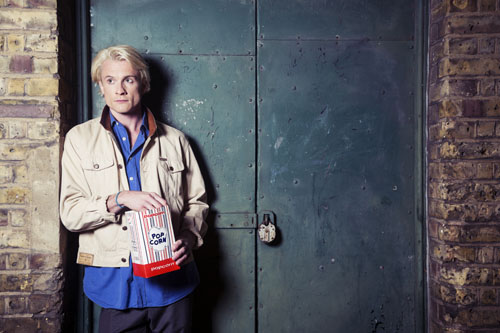 “Sensational…so good you’d think we made him up” Guardian
“As fizzing Technicolour pop highs go, Meanwhile is as good as it gets” NME
“The songs suggest an almost uncontainable talent…extraordinary” Sunday Times Breaking Act
“Full of colourful bombast and panache…raucous and intriguing. Just listen” Noisey
“You won’t hear a more supremely assured debut this year” DIY

Meanwhile has premiered the second track fom his forthcoming EP, ‘The Element Yes’, on December 1, with the stomping ‘Icarus’ airing today. The 4-track collection will be released on December 1 via Fiction. With additional support across Radio 1 (including Zane Lowe’s Next Hype), 6Music and XFM, and following a sold-out warm-up show at Sebright Arms, Meanwhile is the sole support for La Roux on tour across the UK & Europe in November and December (including a date at London’s Shepherds Bush Empire on November 12).

A singer, producer and film score writer, the early glimpses of Meanwhile – February’s thunderous ‘Luvletta’, the escapist rush of ‘Bigger City’ – hinted at an audacious young talent, whose thrilling falsetto and industrial sound occasionally appeared as if from another planet: from the scarce information and anonymously Warholian imagery to the very name Meanwhile, and its suggestion of a parallel, fantasy narrative. The reality, of course, was far less exotic: written and produced from his bedroom in a small town off the M3, 23-year-old Tom Andrews became transfixed at a young age by the visual film scores of Tim Burton collaborator Danny Elfman, and began composing ambitious instrumental pieces after school at the piano. He sought to take what he learned there and channel it through the hip-hop productions of Madlib and the larger-than-life pop of his parents’ record collection (Prince, Bowie). An intended tattoo to tackle anxiety – “Meanwhile” – gave birth to a colourful alter-ego, and the tensions that would persist through songs which are simultaneously outlandish and honest, confident but conflicted.