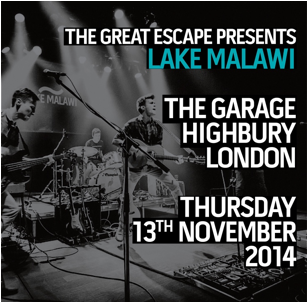 THE NEXT LONDON SHOW:

13th Nov- The Great Escape Presents Upstairs at The Garage

“This is superb!!! My total respect, these songs are beautiful.”- The Rolling Stones’ producer Chris Kimsey

“Working with Albert was always really inspiring. It motivated me to grow as a human being.” – Yemi AD (Kanye West’s Show Art Director)

As the singer of MTV Award winning Charlie Straight, front man Albert Cerny’s new band Lake Malawi (named after the Bon Iver line “So it’s storming on the like,”) has already cemented itself as one of the fasted growing indie-pop outfits. Their last single Always June received support from both Amazing Radio and the BBC, while the band found themselves supporting Thirty Seconds To Mars at their Prague show in June.

Having been confirmed to play at The Great Escape 2015, Lake Malawi will play a special show at The Garage in Highbury hosted by TGE organizers on Thursday 13th November. http://greatescapefestival.com/tge-presents-returns/

But before the curtain finally falls on an impressive 2014 for the group, they have now unveiled their latest hit-in-the-making Chinese Trees, a song that both touches your heart and lifts your spirits at the same time. It was recorded and co-produced by Matt Lawerence (Mumford & Sons, Vaccines, Foals) and mixed by Mo Hausler (Bat For Lashes, Everything Everything, Dog is Dead)

Taking a leaf out of the books of other vocally-focused artists Like Lykke Li and Passion Pit, Chinese Trees has this effervescent energy surrounding it that, while seeming very minimal in its songwriting, allows you to really get inside the song and take in every lyric. It is one of those rare pieces of music that breathes life into you as you listen, giving the track a very honest and genuine quality.

Chinese Trees will be available for sale and download on 1st December 2014.