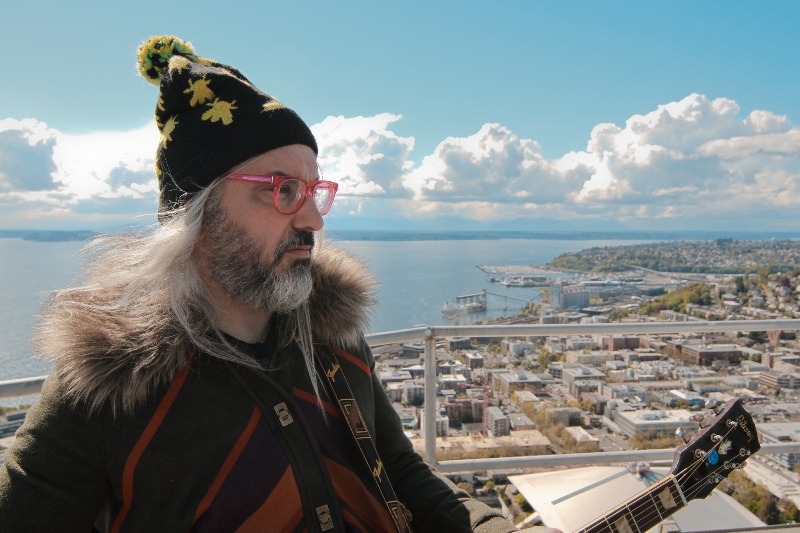 You can now watch J Mascis’s wonderful “Tiny Desk Concert,” featuring Tied to a Star tracks “Stumble,” “Drifter”/”Heal the Star” and the Dinosaur Jr. classic  “Little Fury Things” (from You’re Living All Over Me).

NPR Music’s Bob Boilen says of the performance, “The loudest guy in the world came to the “Tiny Desk” to perform some of his quietest music…for years a guy who’s turned my ears red, showed up armed with just an acoustic guitar. I even had an amp for that guitar all lined up, but he decided to not plug in. So we get a rare treat: a low-key J Mascis, performing emotional songs…If you think Mascis draws all his power from sheer volume, this ought to convince you otherwise (see NPR Music November 22).

In related news, Sub Pop will release J Mascis’ cover of the Mazzy Star classic “Fade Into You,” as a Record Store Day Black Friday exclusive on November 28th. The 7” single features “Fade Into You” on the A-side, and the previously-unreleased “Outside” on the B-side, which was recorded during sessions for Tied to a Star.  The “Fade Into You” single is limited to 4000 copies worldwide.

J Mascis will be visiting the UK on his world headline tour in support of Tied to a Star at the dates below. Find tickets at www.JMascis.com

Tied to a Star, led by the songs “Every Morning” and “Wide Awake,” was recorded and produced by Mascis and mixed by John Agnello at Bisquiteen in Amherst, MA. Tied to a Star is now available from Sub Pop Megamart, iTunes, and Amazon.

“On the sweet, shaggily swooning Tied to a Star, the jolts tend to come from the music’s simple beauty” – NPR Music

“It makes for a more organically toned collection that proves the grey wizard doesn’t need heavy distortion to stay at the top of his game.” [8/10] – NME

“On his second solo record, Tied to a Star, Mascis molds yet another subdued prism through which to glimpse his rare genius as a guitarist and songwriter.” [8.1 /10] – PASTE