IS TROPICAL
Black Anything
The New Album
Recorded Across Five Continents, Released in Five Parts on 10” Vinyl
First Release – Crawl / On My Way, 8th December 2014 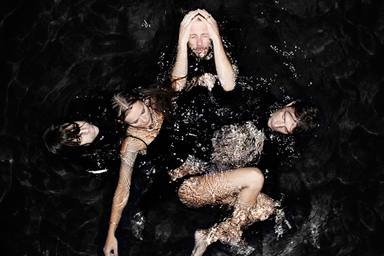 IS TROPICAL are set to release their modular third LP ‘Black Anything’ via the newly founded, New York based Axis Mundi Records, with the first two songs from the album, ‘Crawl / On My Way’, released as the first of five 10” vinyls on 8th December 2014.
Both tracks have been premiered, Crawl on Noisey and On My Way on Billboard.
Working alongside producer and collaborator Luke Smith (Foals, Depeche Mode, formerly of Clor), IS TROPICAL set out in the summer of 2014 to record the album across five continents; North America, Africa, Europe, Asia and South America.
The result, ‘Black Anything’, will be released in five 10” transparent picture disc installments, containing two tracks per vinyl. The artwork is a visual representation of both the recording process and the release, with each 10” vinyl displaying the continent in which the tracks were recorded. When displayed on top of each other, the five vinyls create the globe, unifying the concept as a whole. “Each vinyl will be an art work and a tribute to the continent it was recorded in. It is being made available worldwide without prejudice to territories. The records are being promoted through local networks of people who are inspired by the project”.
Starting the project by building a studio during the label’s foundation in Brooklyn, NY for their first release of tracks ‘Crawl / On My Way’; the album is an evolving record of a year’s worth of the band’s noted touring schedule and ‘band without borders’ mantra. “Coming from a background as Fine Artists, we always wanted to create and establish our own project, so the inception of a musician-led record label like Axis Mundi was always imminent”.
At Axis Mundi there are no creative boundaries. Artists are implored to explore, to push limits, and experiment with wholly original concepts and approaches. Artists on the label are encouraged to collaborate with one another, blending various types of artistic expression that regularly transcends music to more visual, and often, abstract realisations.
“The guidance we received from [previous label] Kitsuné was great for our development and something we’ll always be grateful for. They had faith in us from day one, so it was always going to be hard to part ways, but we now feel experienced enough to push forward with our own self-filtered product”
As well as introducing the vocals of Kirstie Fleck (singer of 2013’s ‘Dancing Anymore’) as a full-time member of the band, ‘Black Anything’ contains the captured sounds and ambient impressions of the many places IS TROPICAL have visited, and reflects the ongoing excitement and impulsiveness of the creative process. Treating ‘Black Anything’ as a project – rather than an album in the traditional sense – and releasing it in this modular way gives each installment its own time to stand alone and be digested. “Recording in this way has allowed the tracks to develop over time and emerge as a curated and intended body of work and is by no means a compilation or a compromise”.
“We have always wanted the opportunity to present each track the way it was intended – in its own right and not as either a ‘single’ which is often given all the attention or a ‘filler’ to be largely overlooked. Presently, the value of songs is largely reflected by how many views it’s music video received and this is something we’ve experienced first-hand, but we have never written or released a song we didn’t want people to hear. We do not believe this should be a privileged or unusual expectation”
“’Black Anything’ was born through touring and recording in places we’ve grown to know and love through our music. We wanted to use the inspiring environments we were in to develop and craft the songs instead of locking ourselves in a studio in London.”
‘Black Anything’ is a mirror held up to the places and people who will help bring it into being.
www.facebook.com/ISTROPICAL
www.twitter.com/istropical
www.istropical.com
www.instagram.com/istropicalofficial
www.soundcloud.com/istropical