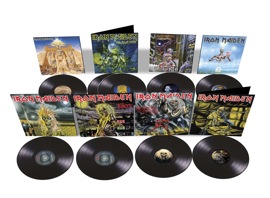 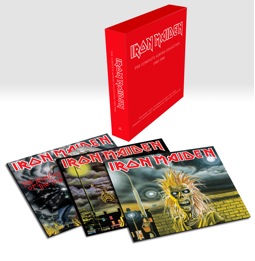 Following the announcement earlier this year, the entire vinyl collection of Iron Maiden’s 1980s albums – which are being issued in brand new heavyweight 180g black vinyl pressings – will be completed on
November 24th, with the final two albums, ‘Somewhere In Time’ and ‘Seventh Son Of A Seventh Son’ finishing the collection.

The albums have been cut from the original analogue master tapes and packaged in identical artwork to the initial 1980’s releases. A strictly limited edition run has been made available with a collectors’ box to house the entire album collection.

In conjunction with these premium album releases, a one-off run of the 7” singles from each respective album have been made available. These highly collectable black vinyl singles are also cut from the original analogue master tapes. Released in replica artwork packaging, they have fast become a must-have item for fans, collectors and anyone who missed out first time round.

In the United States, twelve of these 7” singles have entered the Top 20 Billboard Singles Overall chart with ‘The Trooper’ hitting the No. 1 spot.

The records were released chronologically across a two-month period starting October 13th with the first three albums (Iron Maiden/Killers/The Number Of The Beast) and the seven corresponding 7” singles:

October 27th: Piece Of Mind, Powerslave and Live After Death and the six corresponding 7” singles:

And finally, on November 25th, just in time for Christmas: Somewhere In Time and Seventh Son Of A
Seventh Son and the six corresponding 7” singles:

The release of these high quality, black vinyl records offers optimum choice to fans who want to own a piece of Maiden’s authentic 1980’s vinyl sound, or for those simply wanting to rediscover this much loved, iconic format.

For information including special films on the ‘Making Of’ the remastered Audio and Artwork visit www.ironmaiden.com

LITTLE BOOTS unveils the video for ‘TASTE IT’