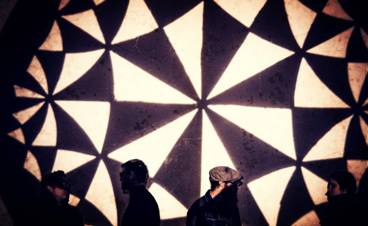 Blues-rock four-piece Bernaccia are pleased to announce their new EP, ‘Light //-// Dark’, set for release on 24th November.
Following the success of their widely praised ‘Cinema’ EP, the Newcastle-based collective return with an explosive anthology of hard-hitting blues, rock and folk – a combination that has already seen them win the hearts of The Crack and Louder Than War, amongst others. Taking influence from the likes of The Doors and Johnny Cash, the foursome create a riveting sculpture of atmospheres, rhythmic slavery, and melodic seduction – one that is simultaneously expansive yet intimate.

‘Darkness Walks’, a riff-heavy offering, ups the ante with pulsing Royal Blood-esque melodies throughout. As the title suggests, this is a dark and deadly beast, with a thunderous bassline leading the charge. Noble orchestrates proceedings with his Jim Morrison-like vocal sitting hauntingly over the procession of jangling guitars and thrashed cymbals, while the thunderous finale ebbs into an eerie ending.

Next on the agenda is ‘Manifest’, a powerful blues melody greeted by spaghetti western-esque whistles that is currently being offered as a free download –via their Soundcloud page. Noble drives the affair in characteristically dominant fashion, before being joined by the enchanting voice of guest vocalist Ellen Chetcuti, whose serene trill provides the perfect contrast in this downtempo serenade. Rumbling drums and spacey guitars are a signature of Bernaccia’s sound, and ‘Manifest’ encompasses these features exquisitely, before a lone whistle defiantly returns, elegantly transitioning into the concluding number.

Closing track ‘Blue Man’ opens with a chorus of gospel-licked hums, greeted by dainty swung drums and swirling acoustic guitars, before reverb-charged vocals enter the frame. Chetcuti again shares the stage on the concluding track, adding an Americana feel to this already Deep South-inflected number and leading the EP to a rousing finish.

Having recently shared the stage with the likes of Royal Blood and Wolf People, Bernaccia are taking both the North East and the rest of the UK by storm with their unique take on blues-rock. A show-stopping appearance at Evolution Emerging 2014 demonstrated the group’s telling ability to work a crowd, and ‘Light //-// Dark’ looks set to prove them as a real force to be reckoned with.