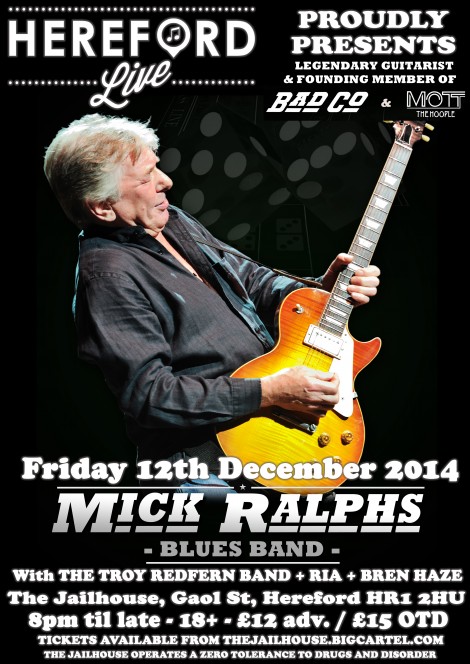 Blues Rock legend, Mick Ralphs and his band are thrilled to announce the appointment of their new lead singer, Adam Barron, who will be joining them for all of their UK dates this winter; a tour which ends in Ralphs’ hometown Hereford, at The Jailhouse.

Adam comes with a background in classic blues-rock with a set of pipes that you’ve really got to hear. He has built a following, in his own right, following his successful run on BBC’s The Voice UK, in 2013.

“I am incredibly excited to get to work with the man who, with Bad Company and others, wrote the songs I fell in love with years ago, and look forward to stepping into the shoes of many incredible frontmen and singers he has worked with over the years,” said Adam. “I’m up for the challenge and can’t wait to get started.”

Tickets for this gig can be purchased from The Jailhouse, Tobias James Art & Framing on St. Owen Street, or online at herefordlive.co.uk.