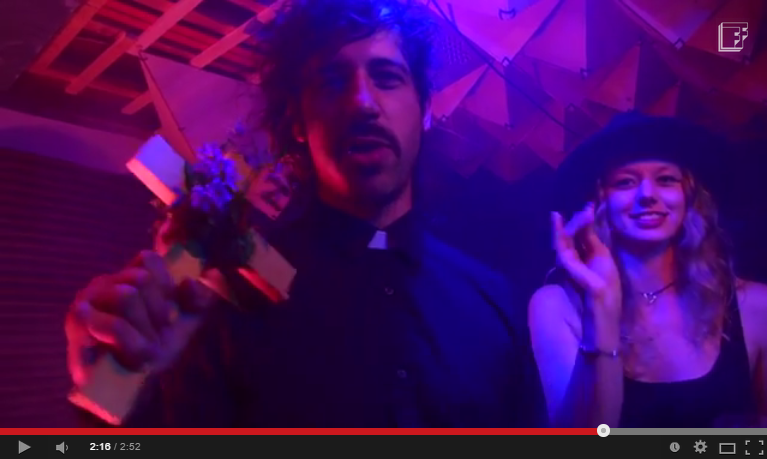 ‘Stoned To Death’ album out now via Failure By Design Records

Following the release of their critically acclaimed third album ‘Stoned to Death‘ this week on Failure By Design Records, Seattle garage blues quartet Fox and the Law return with a post-Halloween epic video for their latest single ‘Cheap Talk’.

Directed by Ryan Alexander Davis, the schlock-horror mini-movie runs more like a twisted episode of The Mighty Boosh and sees the band terrorised by a cursed guitar that calls on the demonic powers of a voodoo-practising witch doctor, before one of the coolest priests we’ve ever seen turns up for a spot of rock’n’roll exorcism.

“Filming the video was chaotic!” explains front man Guy Keltner of the shoot “Everyone involved is a super close friend or ours & also really busy with their art, so we strained at times in terms of coordinating our schedules. The budget was also paper thin so we literally shot that whole thing at my house and in our home studio.”

“However, the whole experience was still a total blast. We got to play around with each other’s makeup and spitting fake blood is about as fun as it gets. I also loved that bit with the milk at the end. We had to shoot that about 20 different times because I couldn’t stop laughing. I was soaked in sweat, milk and corn syrup.”

Their new album ‘Stoned To Death’ has already drawn praise from Classic Rock (who picked lead single ‘Cheap Talk’ as their track of the week), The Blues Magazine, Blues Matters, Examiner, Songwriting Magazine, Brooklyn Vegan and a whole host of online blogs heralding their retro-rock as a refreshing and meaty slab of riffs for fans of Royal Blood, Jack White, Sabbath and Led Zeppelin.

Strong influences include T Rex, The Stooges and Stevie Ray Vaughan and the band have previously recorded albums with Martin Feveyear (Mudhoney, Queens of the Stone Age, Modest Mouse) and Graig Markel (Band of Horses, Nada Surf), who is the man at the production helm on Stoned To Death.

‘Stoned to Death’ is out now – buy physical here or on iTunes here.

Fox & The Law on the world wide web: