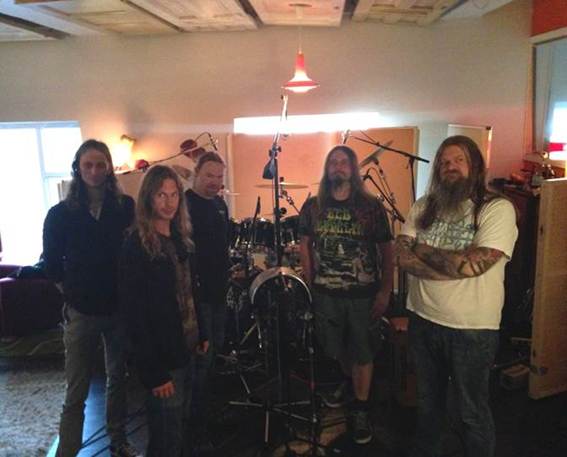 “This will be a killer album.  I am already willing to stake a lot on that.  As the last time with ‘RIITIIR’, the first line of defense / attack is made through me, Grutle [Kjellson, vocalist & bassist] and Cato [Bekkevold, drummer] recording our guitar, bass, and drums live in the big Duper room, complete with the ceiling covered in old wooden doors for max room effect.  I have to admit I’m starting to feel the effect of working around the clock (there are also things to be done at the home studio, office, and around the house in-between the sessions), but it doesn’t matter how tired the body gets as long as the mind is on fire!”

About this upcoming new release, band members have previously stated: “The high level of energy in the songs reflects both an inspired and an ever-harder working band that keeps pushing their own and their associated genres’ limits.”

Main recordings for the new album are taking place at Duper and Solslottet Studios in Bergen, Norway with additional recordings done at Conclave & Earshot Studios (presided over by ENSLAVED members Larsen and Ice Dale), and Ivar Bjørnson’s Peersonal Sound Studios.

Album number thirteen is being produced by band members Ivar Bjørnson, Grutle Kjellson & Herbrand Larsen together with Iver Sandøy.  Mixing will be done by Jens Bogren at Fascination Street Studios in Örebro, Sweden.

Artwork will be illustrated by long-time collaborating artist and “sixth ENSLAVED member” Truls Espedal, who has painted all seven album covers since 2001’s ‘Monumension’.

2012’s studio release, ‘RIITIIR’, garnered ENSLAVED a seventh nomination for a Spellemann Award (the Norwegian equivalent of the American Grammy) in the category of “Best Metal Album.”  They have won a Spellemann Award four consecutive times for the following four studio albums: ‘Axioma Ethica Odini’ (2010), ‘Vertebrae’ (2008), ‘Ruun’ (2006), and ‘Isa’ (2004).

‘RIITIIR’ can be purchased in CD & vinyl format from the following links here and here.