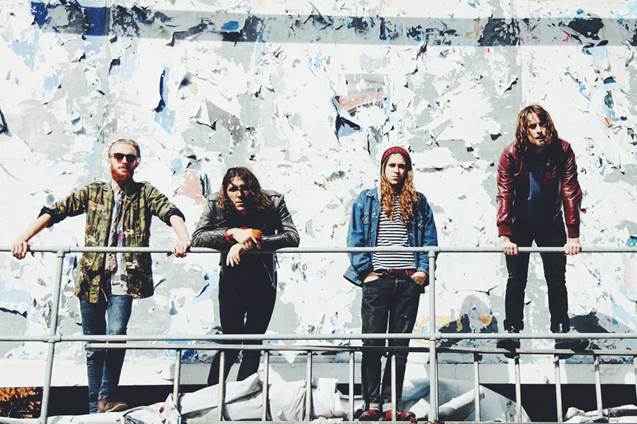 DEMOB HAPPY STREAM NEW TRACK ‘I WANNA BE A HIPPY’

“Gritty, grubby and dangerously infectious” – The Line Of Best Fit

After destroying venues up and down the UK this October on their first ever headline tour, Brighton’s off-kilter garage rockers Demob Happy will release their debut single ‘Succubus’ on November 17th via Milk Parlour records.

Where ‘Succubus’ sees Demob Happy kick out a degenerate scuzz clatter, the B-Side is an adrenalized cover version of Technohead’s 1995 rave anthem, ‘I Wanna Be A Hippy’ and is available exclusively on limited edition 7” vinyl.

Frontman Matt Marcantonio explains – “I remember my older brother playing the Technohead version when I was too young to know what the f*ck it all meant. But it’s a cover, which makes ours a cover of a cover. It’s a David Peel jam song that Technohead sampled that I guess we’ve un-sampled. Some people clock it as a cover, everyone else just thinks we love smoking weed so much we wrote a song about it. Either way works.”

Demob Happy constantly push themselves outside of their genre to create a spontaneous clatter of fresh and exciting sounds. The Newcastle born quartet left their adopted home of Brighton behind to record ‘Succubus’, venturing deep into the Welsh countryside they built their own studio away from the confines of the city. Upon returning, Demob Happy took ‘Succubus’ to Pink Floyds engineer Andy Jackson for mastering duties. The B-Side was produced by Mike Lord and mastered by Nick Lewis.

Whether it’s battling in court for their gear back from the noise police, making music videos for £10, or recording and producing everything they do themselves, then returning the gear to the shop afterwards for a refund – Demob Happy didn’t get it easy, they just made it look that way.

‘Succubus’ is due for release via the band’s own label, Milk Parlour Records, on digital download and limited edition 7” vinyl.