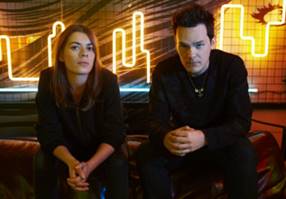 Cash+David are a very exciting duo out of London, giving splintering pop a duly required dose of synthsDIY Magazine

Cash+David seem to be ready for greatness Hilly Dilly

London electronic project Cash+David will release a new single ‘Bones’ on December 8 2014, through their own label +. The track is the follow-up to previous single ‘Pulse’, which topped Hype Machine and drew support from Radio 1 and 6Music, also spawning a remix  from San Francisco dub/psych duo Peaking Lights. Cash+David will play a free show at KANADA Presents at Birthdays Dalston on November 18 2014.

Tim Ross (Cash) and Liz Lawrence (David) emerged earlier this year with debut single ‘Funn’, which stitched together Lawrence’s disembodied voice with slabs of crunch guitar, assimilating a love for the likes of Sleigh Bells and Poliça. Combining a strong aesthetic with a genre-defying mix of synths, samples and spectral pop, the track (later reimagined via a dreamlike remix from Mad Decent’s Daktyl) went top ten on Hype Machine and established fans at Radio 1 and 6Music. ‘Bones’, however, is more of a starkly direct affair, which, taken with its predecessors, completes something of a triptyque. Though its ‘morning after’ sentiment is vulnerable – “Call them off, call the dogs off / Cos I’m already weak enough / Beg the sun not to rise again…” – it is refracted through Cash+David’s dizzying prism of influences, combining a pop sensibility with their signature bass-heavy synths and insistent rhythmic loops.

Ross and Lawrence first came together creatively when he produced Lawrence’s folky solo debut for EMI (Liz was just 19), at which time the pair were struck by the similarities in the influences they found mutually galvanising, from Phoenix to Bibio, via Surfer Blood and The xx. Time thereafter was spent pursuing their own projects, with Ross continuing to work in production and arranging jobs, whilst Lawrence joined Bombay Bicycle Club’s live band (a spot that has also been occupied by the likes of Lucy Rose and Rae Morris). A feeling of unresolvedness led to Tim calling Liz out of the blue; “I really wanted to smash down creative constructs, reimagine and rebuild.”

Their initial collaboration took the form of a speculative xmas jingle for a TV ad- they didn’t get the gig, but the seeds of Cash+David had been planted. Frustrated by the static & solemn nature of folk music, Lawrence suggested working together on some electronic music using “the weird little loops and samples” she’d been collecting. Ross, a graduate in classical orchestration and modernist composition, had meanwhile finished arranging strings for a Bloody Beetroots album, an intensely satisfying experience which had rekindled his creative fire. Combining Ross’s long-standing nickname and Lawrence’s notion for a concept band whose every member would be called David, initial tracks emerged during a turbo-charged honeymoon period.

Cash+David’s meticulous approach extends far beyond the music they are producing, with Lawrence’s art school education dictating a precise and detailed aesthetic, reflected in everything from their interlocking logo to the arrestingly, interlinked artwork of the singles, even theambiguous couples who appear in their videos (directed by James Willis, also behind Disclosure and Katy B visuals). “There was a real frisson between Tim and I when we met,” reflects Lawrence, “We’re integral to each other, and that’s reflected in the name, the logo, the label, everything we do. It enables movement, and space.”

Cash+David are Tim Ross and Liz Lawrence. Together, they form an equation that feels set to become truly greater than the sum of its parts.