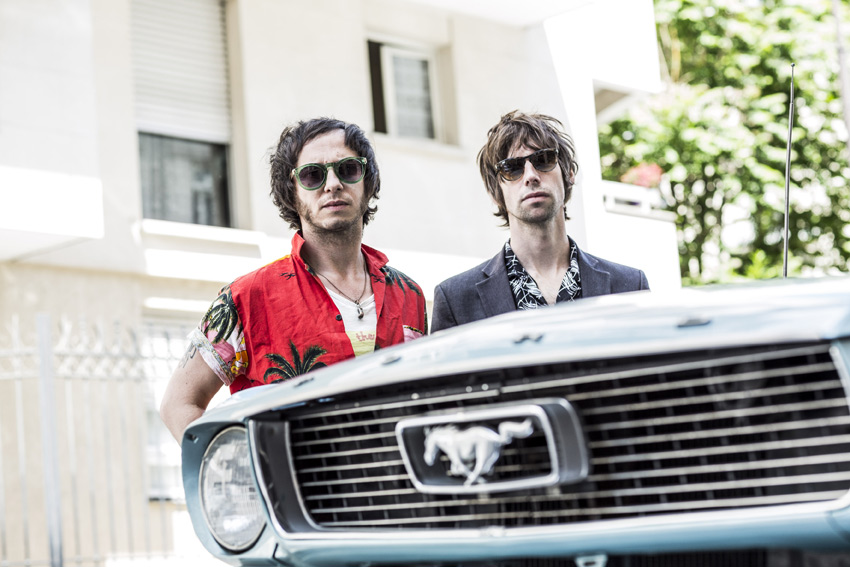 “Slightly seedy, effortlessly gorgeous, sun-kissed whistle-pop that sticks its middle finger up to the changing of the clocks.” – DIY

“For those who believe that garage rock, acid punk and freakbeat are more than just handy reference points.” – Clash

When was the last time you woke up in the morning to be told by your own brain exactly what you will be listening to? Every day right? Your brain picks it and you hum it.

New UK / French flower punk band Bosco Rogers, formed by Barthélémy Corbelet and Delphinius Vargas, have been said to have created an ‘earworm’ in their debut track, ‘The Middle’ taken from their Googoo EP out December 1st via Bleepmachine. It’s a welcome earworm alright, made with a laid-back, shuffling break-beat that is driven by a whistling riff and a fuzzy guitar that oozes sun-tinged psychedelia. It’s the track that takes you away from the concrete and the cars, all the way back to the beach, as explained here by Vargas:

“The song was born on Trouville beach at the end of summer two years ago. Barth sat on the beach with his dog Stupid, watching a picturesque sunset, inspiring memories of summer’s lost love. He felt a deep melancholic euphoria and started whistling a melody, unconsciously, as if it was a song he already knew. Then realised it was a song that didn’t exist…yet.”

A couple of weeks later, working hard in a studio in Hastings, Del found the riff to give it Bosco Rogers’ signature fuzzed-out sound. The lyrics were then finished and recorded in Rouen, France by Barth. It’s a song about sunsets…and pets.

Taking inspiration from bands like The Monks, The B-52’s and Guided By Voices, Bosco Rogers’ debut Googoo EP is loaded with a dose of 60’s psychedelic rock, new wave and proto-punk. The duo met one fateful night in a London boozer; they’d both been working on projects with ex-Food Records head honcho Andy Ross, a drunken conversation was struck up over the pool table. Del (who is notoriously bad at pool) received a sound thrashing, Sambuca was slammed, friendships were formed and our love story begins. Keeping in touch via the modern miracle of the interweb, the un-dynamic duo sporadically contributed to each other’s work. At some point the ridiculous plot to form a band was hatched, Bosco Rogers stumbled into existence, and after much procrastination and a couple of round trips to Paris and Hastings, some music emerged.

All songs were written, composed, produced and recorded by Barth and Del. Mixed by Jonathan Gilmore at Livingston Studios (London) and mastered by Robin Schmidt at 24-96 Mastering (Karlsruhe). The cover art was created by Robin Eisenberg, also known as Crocodiles’ keyboard player.

Googoo EP is due out December 1st Bleepmachine. Pre-order it on iTunes: https://itunes.apple.com/album/googoo-ep/id932794861?l=fr&ls=1