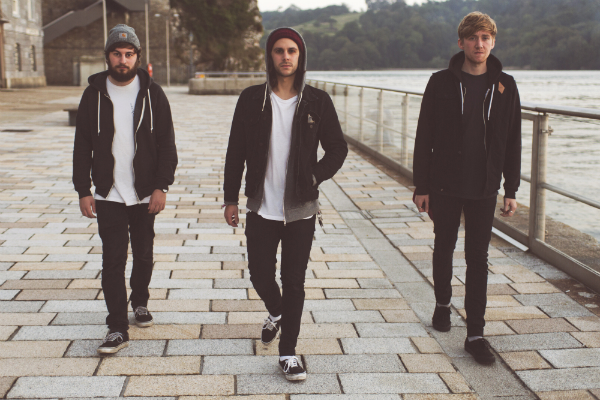 “another showing of the British rock scene in rude health.” – Rock Sound
“nothing short of extraordinary.” – The Independent

South west three-piece Black Foxxes have unveiled another track from their forthcoming EP ‘Pines’. Titled ‘Home’, the track documents guitarist/vocalist Mark Holley’s toil with the progression of his life. As he says “it reflects how frustrated I was feeling at the time of writing. I’m an extremely solitary person and the song mirrors those emotions. The line about building a home simply equates to wanting to have a life completely by myself, where I don’t have to live up to anyone else’s expectations.”

Black Foxxes will release their debut EP ‘Pines’ on 24th November. Doing so totally independently, the trio have cultivated a sound incorporating a dynamic mix of raw noise, extremely immersive vocal breaks and guitar hooks that are almost disconcerting, so considered is their drive. The previously released evocative music video for ‘River’ accompanies a moving song about the stigma attached to people falling in love. Tackling the situations people have to go through to find themselves at a young age, ‘River’ is a very relatable slice of emotive rock.

Elsewhere on the EP, ‘You Could Have Been A Man’ documents vocalist Mark Holley‘s struggle with Crohn’s disease and its detrimental effect on his life experiences. It’s a bleak track but one which enabled Black Foxxes’ existence and as he says “I’d take years of suffering for that any day.” The track ‘Pines’ is equally anguished but more abstract in its subject matter focusing on a fictional character in turmoil. Opener ‘You Gotta Grow’ explores small town claustrophobia with ‘Home’ being another exploration of frustration.

Already pricking the ears of BBC Introducing through both regional and Radio 1 plays, the band have single ‘You Gotta Grow’ already under their belts and look set to continue their trajectory towards the forefront of British rock music with their debut EP. You can’t really sum up Black Foxxes’ sound by comparing them to other artists, but they certainly concur that the classics stand the test of time for a reason. Mixing the raw, intense sound of those that paved the way for popular acts of today (Neil Young, Nirvana, Led Zeppelin) with a contemporary twist akin to the likes of Brand New and Manchester Orchestra, Black Foxxes are ready to fly the flag for modern British rock.