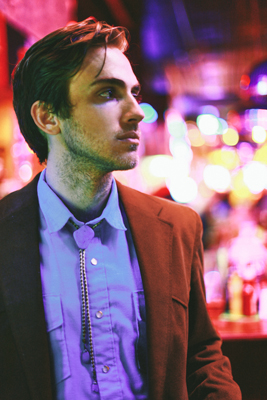 Andrew Combs’ second album, All These Dreams, marks a huge step forward for the Nashville-based singer-songwriter. The album will be released on 26th January via Loose Music. The album release will bring Combs back to the UK, where he appeared at End of the Road Festival in September along with playing his first ever London headlining show to a sold out audience.

Using his gifts for lyricism and wry observation, Combs weaves tales of love, sin and redemption on the new album, in a style that brings together classic country and contemporary pop. Here, Combs continues to carve out his own singular path as an artist, finally reaching the heights of his Texas songwriting heroes.

Combs’ debut album, Worried Man, was released in 2012 on Chicago-via-Nashville indie label Coin Records. American Songwriter named the album one of the year’s best, while Southern Living praised Combs for being “well on his way to becoming a preeminent voice in his genre” and in the UK, Rough Trade Shops made Worried Man one of their Albums Of The Month. For the new album, Combs tapped Nashville producers Jordan Lehning and Skylar Wilson, who recently co-produced Caitlin Rose’s The Stand-In. Combs became familiar with the producers while supporting Caitlin Rose on her album-release tours in the U.S. and Europe. All These Dreams was recorded in Nashville with many of Combs’ long-time musical collaborators, including lead guitarist Jeremy Fetzer and pedal steel guitarist Spencer Cullum Jr. (of the instrumental duo Steelism) as well as bassist Mike Rinne, drummer Ian Fitchuk, and Lehning and Wilson on keyboards and percussion.

“I feel like this record has a much different thread that ties the songs together than Worried Man, which was more raw and bare-bones, in songwriting as well as production”, says Combs. “All These Dreams explores more complex arrangements, lyrics and musical tones. “Roy Orbison and Paul Simon were definite different influences,” Combs continues. “Also, this record was very collaborative. Except for the songs ‘Pearl and ‘In the Name of You,’ all the tunes on this album were co-written. Due to my job as a staff writer in Nashville, it just naturally worked itself out that way. Needless to say, having other people writing with you brings in different musical and lyrical ideas.”

While some of the songs on Combs’ first album portrayed a kind of youthful hard living, the new album explores a deeper sense of spirituality. “Spirituality and songwriting kind of go hand-in-hand to me, in the way that I am constantly searching for something bigger and more meaningful,” explains Combs. “A song like ‘Slow Road to Jesus’ is about finding redemption, but it’s also about coming to terms with taking the long way to get there.”

Andrew Combs is featured in the upcoming documentary Heartworn Highways Revisited, alongside Nashville-based songwriters like John McCauley, Jonny Fritz and Robert Ellis – as well as one of his heroes, Guy Clark. But the 27-year-old songwriter is quick to point out that, though there is a similar sense of camaraderie in Nashville today, “the songs and writers were much better in the ’50s, ’60s and ’70s. I’m not saying there aren’t talented people in Nashville now, but I don’t think we pay near as much attention to the song as they did back then,” adds Combs. “Maybe it’s ’cause we’re too busy tweeting about our latest gig or wardrobe purchase.”