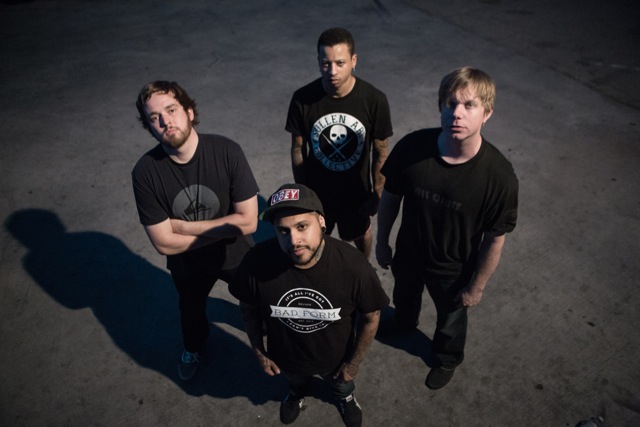 This Legend, from Los Angeles, California, have unveiled their debut single stream, through TeamRock

Former Yellowcard members Longineu Parsons III and Ben Harper have re-united and formed a new pop-punk band. The new collaboration will be called This Legend, featuring members LP, Ben Harper, Chris Castillo (Stanley and the Search), and Steven Neufeld (Hey Mike!). The band has signed to Cyber Tracks, an LA based record label owned by El Hefe (guitarist of NOFX) and wife Jen Abeyta. Their debut album will be produced by Sam Pura (The Story So Far, State Champs) and is to be released, November 11th 2014.

LP ON FORMING THIS LEGEND: “After being in Yellowcard for 18 years, this will definitely be a new experience for me. The last 18 years with Yellowcard has played a big role in who I am today. I am excited to begin this new adventure with my best friend Ben Harper and re-unite in a new musical endeavor together. I’m stoked to embark on this journey with one of my inspirations, El Hefe of NOFX, and I feel This Legend is a perfect fit for the Cyber Tracks family. Jen and Hefe have been very supportive throughout my new transition and I feel we’ve created a solid team. I can’t wait to start writing again. Thank you to my fans for sticking by my side throughout all of this. See you on the road very soon!” – LP

CYBER TRACKS ON SIGNING THIS LEGEND: “I used to chill with LP and Ben back in my Warped Tour days. Their level of musicianship has impressed me over the years, so it’s no doubt this will be a great album,” says El Hefe, with Jen adding, “I’m confident of what’s to come from this new collaboration. It’s a fresh approach and I feel that we’ve created the perfect team in a family environment. Chris is a phenomenal songwriter, and from the demos I’ve heard so far, I anticipate this to be a killer record.”

It’s no surprise that creating a band takes a lot of work, but coming out of previously successful bands and having to start from scratch takes honest passion. For the first time in over ten years, best friends Longineu Parsons III “LP” and Ben Harper, both formerly of Yellowcard, re-united in May, 2014. They have enlisted Chris Castillo of ‘Stanley and the Search’ and Steven Neufeld of ‘HeyMike!’ to form This Legend.

With a world renowned trumpet player as a dad, it was inevitable that LP would become an unstoppable musician. Starting at the tender age of two, LP quickly picked up the drums with the help of professional drum instructors Max Roach and Art Blakey. Fast forward several years, LP would meet soon-to-be best friend and guitarist Ben Harper at Douglas Anderson School of The Arts. The two formed what would become the well known pop-punk band Yellowcard and toured the world together for many years. Harper would later leave Yellowcard to continue his musical endeavors with his self-founded label, Takeover Records. One of his first signings would be HeyMike!, a punk band from Camarillo, CA. The band saw moderate success throughout the mid-2000’s with the help of Harper’s guidance. Harper and Neufeld, the band’s singer/guitarist, became close friends during their time working together. Also spawning from the local scene, Castillo (having previously played in several San Gabriel Valley bands including ‘Stanley and the Search’) caught the attention of NOFX guitarist El Hefe and wife Jen Abeyta, as a significantly talented singer/songwriter.

After LP’s departure from Yellowcard in March of 2014, he partnered with Harper to collaborate again. Unsure of what was to come musically, the duo wanted to lean on El Hefe for advice. El Hefe suggested they begin writing with Castillo, a musician he and Abeyta had taken under their wing for some time. After solidifying a singer, guitarist and drummer, a bassist and backing vocalist was needed. The group enlisted long time friend Neufeld to fill the slot. 2014 would prove to be the perfect year of break-ups and make-ups. In May of 2014, the band would sign to Cyber Tracks, an LA based record label owned by El Hefe (guitarist of NOFX) and Abeyta. Upon selecting the band name This Legend, LP stated, “It’s a positive statement to say, ‘no matter who you are and no matter how many times you get put down in the world, you can look at yourself in the mirror and see a legend.’”