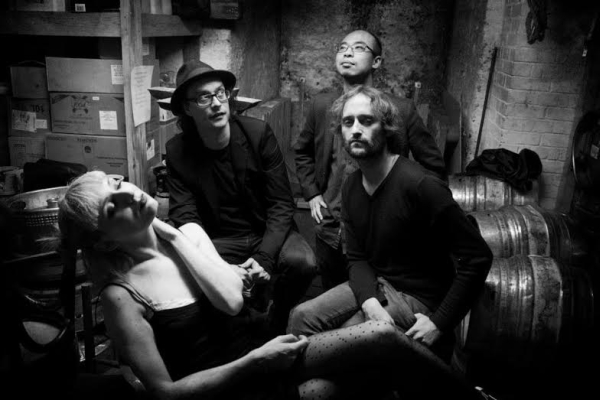 To celebrate All Hallows’ Eve, gloriously inventive London sextet The Vultures are releasing a free download of their spine-tingling new single ‘Vlad’ on October 31. A song that will raise the hairs on the back of your neck due to either its malevolence, its magnificence, or both, ‘Vlad’ should be a staple of every playlist this Halloween.

A beautiful composition of noirish intent, ‘Vlad’ – part-Hammer horror score, part post-punk masterclass – features a dazzling sweep of strings enveloping a resounding beat. Atop this Balkanesque blend drifts a deliciously dark vocal, evocative of Scott Walker making a blood oath with Bela Lugosi: “What’s the point of dying/when you have no soul?” runs the lament for the Impaler; enough to make you shed a tear for the ruthless Romanian prince. ‘Vlad’ is accompanied by a comically discomfiting video, involving a gaggle of mutant muppets hosting a cookery show for the strong of stomach. Kitchen nightmares, indeed.

‘Vlad’ will be officially released on 7″ vinyl, as part of a double-A side with ‘Cancer’, on 8 December on Ciao Ketchup Recordings.

The Vultures are an evenly split male/female sextet whose members descended on the capital from five countries spanning three continents. Comprising three-part vocals, cello, violin, viola, bass and drums, the band bonded over a shared belief that rock’n’roll has become stiflingly dull. The Vultures are anything but, eschewing guitars, synths and digitalism in favour of intense in-the-flesh performance. Their songs’ sinister subject matter may have lured a largely gothic fanbase (as well as such luminaries as Yoko Ono), but The Vultures’ soundscape is sketched from a broad palette, encompassing influences from Bjork to Blondie, Serge Gainsbourg to The Pixies, and resulting in innovative and impassioned alternative song. Set to contaminate the public consciousness in 2015, The Vultures’ debut album, ‘Three Mothers Part 1′, will be released on Ciao Ketchup Recordings in January.

The Vultures show musicality reminiscent of groups such as the Velvets or Floyd, but have their feet firmly in the 21st-century Theatre International

Baroque country-pop with a deep gothic leaning, The Vultures sound like Johnny Cash got kidnapped by Andrew Eldritch and tied to the bed round Burt Bacharach’s gaff Bugbear Bookings