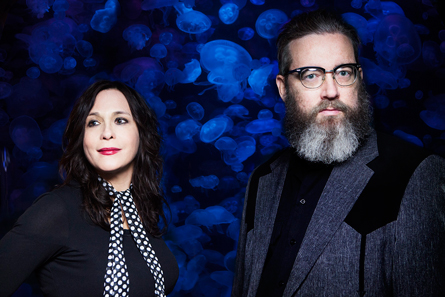 THE HANDSOME FAMILY
ISLINGTON ASSEMBLY HALL – WEDNESDAY 29TH OCTOBER 2014 – SOLD OUT
The Handsome Family have been feted by the likes of Ringo Starr and covered by artists such as Jeff Tweedy, Cerys Matthews, Christy Moore and Andrew Bird. In a career that spans twenty years they’ve toured the world in their own charmingly DIY fashion – one car, one hotel room, one stage…. night after night after night – and in that time they’ve performed as a duo, with a band and have had onstage collaborations with such folk-royalty as Eliza Carthy, country legend Charlie Louvin and indie-kings like Nick Cave and Jarvis Cocker. In each and every instance they’ve more than held their own, thanks in the main to their songs – a series of unique and wondrous compositions that, as Jeff Tweedy once said, are the “product of two beautiful brains”.
Following an extensive European tour earlier in the year to support their latest album ‘Wilderness’, The Handsome Familly return to London for a sold-out London show at Islington Assembly Hall on Wednesday 29th October 2014.

2014 has been a big year for The Handsome Family, with their track ‘Far From Any Road‘ being chosen for the main title sequence of cult HBO series ‘True Detectives‘.
http://youtu.be/p4zluA60hjs