Stream the new 12″ from NAUTIC, who are TIC from FKA TWIGS’ band, BULILION (R&S) and LAURA GROVES – on new label TEST PRESSING EDITIONS‏ 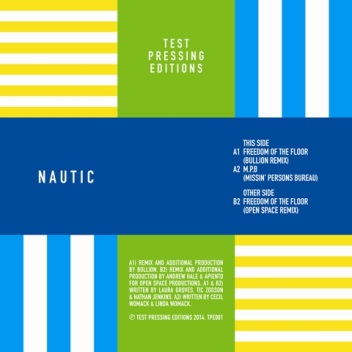 Long-standing music website Test Pressing is launching Test Pressing Editions. The site has been running since 2008 covering the best in electronic music to the right of the mainstream with a focus on clubbing history and future, with a special lean to Ibiza and its foundations. From old tapes from The Ku club  in 1985 and Alfredo’s legendary sets at Amnesia to Jose Padilla’s Cafe Del Mar mixes –  these are the foundations not only of Test Pressing but also of modern clubbing and its music.

The Test Pressing Editions label is picking this baton up and bringing it to now. The first release is from Nautic with ‘Freedom of the Floor’ / ‘M.P.B’. Nautic are Bullion of R&S records fame, Laura Groves plus Tic of Young Turks and FKA Twigs’ band. The track comes with a remix from Apiento of Test Pressing and Andrew Hale of Sade under their new moniker Open Space.

It’s out now and streaming below-


Check out Test Pressing here and buy the vinyl here.