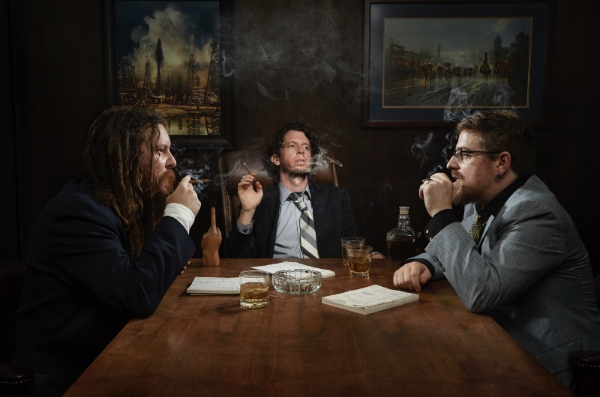 Stream Reign in Bludd by Bludded Head in full via Decibel Magazine | US Tour Dates Announced
Texan trio announce US tour dates in support of Reign in Bludd released on 6/10/14
“Bludded Death exerts an unsettling, furious power, a mesmerizing study in pushing music to extremes.”
DFW.Com

Hailing from the North Texan city of Denton, Bludded Head was initially formed out of an appreciation for Henry Cow’s avant-garde leanings, La Monte Young-inspired minimalism and the sheer punishing volume of doom metal.

Yet this past year it has also served as something of a vibratory vessel of discovery for its mercurial founding member Nevada Hill. A vessel that today, from where we stand and Bludded Head perform, continues to turn out some of the loudest, loneliest and most vulnerable noises you’re likely to hear in 2014. A remarkable truth when you consider that Hill was diagnosed with melanoma in August 2013.

While Reign In Bludd, Bludded Head’s third and unquestionably best album to date picks up where Bludded Head (released earlier this year via Sleeping Giant Glossolalia) left off in its anti-commercial sentiment and cathartic bummer jams, never before has their sound felt so sincere or visceral. From the densely weathered riff that lumbers through ‘Shitsucker Blues’, lyrically drifting in and out of abject consciousness but sonically landing a punch somewhere between the The Body, Noothgrush and Corrupted, to the perfectly pitched cover of Codeine’s ‘Pea’ Reign In Bluddis as about as transformative as they come.

Recorded by Matthew Barnhart at Electrical Audio while the band were in tour throughout May of 2014 Reign In Bludd will be released on 6th October 2014 via Sleeping Giant Glossolalia. The band take to the road this October in support of Reign In Bludd. Details of which can be found below:

“As fun as it is to cover everything Carcass and At the Gates are up to, occasionally it’s nice to shine a light on a truly underground band. Dallas’s Bludded Head definitely falls into that category, scooping out unpleasant sludge with a tendency towards the minimalist. Their misery comes from a real place, too – singer/guitarist Nevada Hill has been battling cancer and the ravages of chemotherapy.”
Decibel Magazine

“Besides having an awesome band name (that perfectly suits their sound), and killer song titles (‘My Ice Cream Fell On The Ground And Someone Ate It!’, ‘Rotten Demon Shit’, ‘Boo Boo Halloween’), these NY knuckle draggers specialize in the sort of down tuned caveman creep we can’t ever seem to get enough of.”
Aquarius Records

“Doom bands come and go, many sounding similar to one another, with the greatest emphasis being placed on how far apart those gut-punch downbeats can be spaced; not so for Bludded Head, who seem to write, arrange and execute great songs, several worlds apart fro

m the sameyness that characterizes many of their peers in the genre.”
W.M. Berger, WFMU
Links: