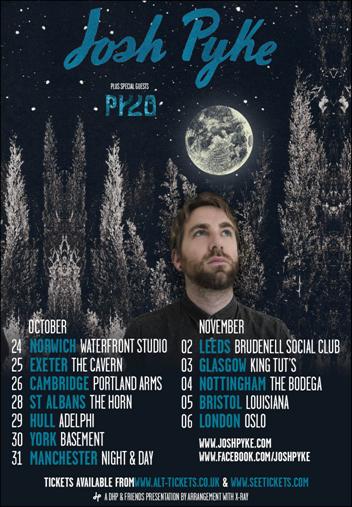 “Pyke is the doyenne of literate acoustica” – Rolling Stone

Acclaimed multi-ARIA Award winning (think an Aussie version of the Brits) acoustic troubadour Josh Pyke returns to the UK this autumn to promote his latest record The Beginning And The End Of Everything, his fourth Top 10 Album in his native Australia.

The – as yet little known in the UK – Sydney born Pyke is one of Australia’s most acclaimed current solo artists. Pyke has ventured to the UK before to tour with Emma Pollock (of the Delgado’s) and his long-time friend and writing buddy Passenger, the multi-million selling artist behind 2012’s ‘Let Her Go’.

The uplifting acoustic belter that is the UK single release ‘Leeward Side’ (which for those lacking any knowledge of sailing is the direction downwind from a point of reference) is an allegory for moving on from a past relationship in a positive way. Inspired by the heart of the song, Director Beatrice Pegard Ferry took ‘Leeward Side’s story of adventure, exploration, finding and losing yourself, and wove it into a new narrative depicting the continuous loop that is; evolution. Whilst also managing to throw Josh into a wolf suit in the process, the video was shot 100% sustainably using recycled materials.

The new album The Beginning And The End Of Everything, which hit #7 in the ARIA Album Chart back home amidst more than one sell-out tour of Australia, explores ideas of desire, death and legacy. For Josh these are the beginning and the end of all decisions made in his life and, as with previous albums, a record of a period of time in his life. Recorded with John Castle (The Bamboos, Washington and The Drones), Josh regards The Beginning And The End Of Everything as his most personal release to date.

Josh Pyke returns to the UK supported by Pylo, one of the new breed of young British bands unafraid of soaring melodies, heartfelt vocals, heart on the sleeve emotions and making the kind of joyful racket that fits the bill everywhere from the smallest club to the biggest festival. Described aptly by Q Magazine as “grand-gestured chill-out rock with amped-up vocals that fans of Shearwater and Snow Patrol will fawn over” Pylo are currently working on their debut album for release in 2015, but in the meantime fans can enjoy the stadium-shoe-gazey rock n’ roll of both Bellavue EP and The Woman EP on Naim Edge Records. Watch the video for Young here: http://youtu.be/jbgrAMFrhws

Josh Pyke has become one of Australia’s most beloved and recognisable singer songwriters thanks to his ability to craft intelligent pop music with uniquely Australian influences and experiences; this is a unique and intimate opportunity to catch Josh Pyke solo and acoustic.