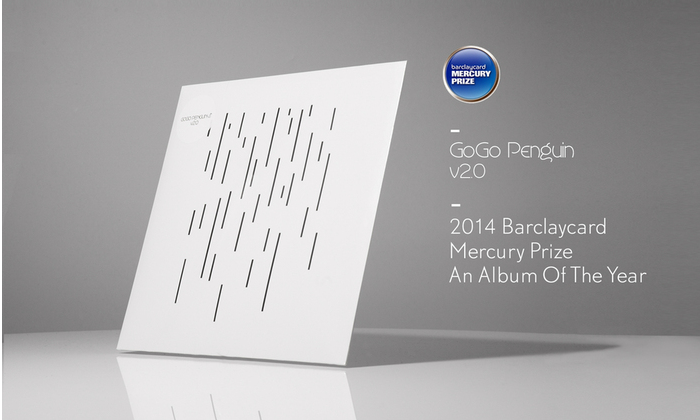 2014 Barclaycard Mercury Prize – An Album of the Year

Intimate Manchester gig on October 21st with support from Werkha

“Jazz, techno, hip-hop and dubstep are glimpsed here, but for all the looping motifs and dance floor vibes, this is the work of three sure-footed improvisers with deep jazz roots“. The Guardian

To celebrate the inclusion of V2.0 as a Barclaycard Mercury Prize album of the year, GoGo Penguin are releasing  a deluxe digital edition of V2.0 with three killer tracks from the original album sessions! Released here for the first time is the incessant ‘Break’ featuring a killer groove that offers a not to the one and only Squarepusher, ‘Wash’, a haunting slice of the band at their most ambient and the wonderful ‘In Amber’, the first track that the band wrote completely together. The title of which was inspired by a book by Kurt Vonnegut where he describes us all as ‘trapped in the amber of the moment’ in reference to time happening all at once rather than in a linear fashion. The release is launched with an intimate hometown gig at the Soup Kitchen on October 21st, with support from local lad and rising star Werkha in a live performance. In addition the guys are giving fans a chance to win a meet & greet and package of goodies with a remix completion in conjunction with SoundCloud. See here http://gogopenguin.co.uk/remix-competition/

GoGo Penguin’s skittering break-beats, telepathic interplay and a penchant for anthemic melody all contribute to a sound that’s wholly their own. Pianist Chris Illingworth’s yearning classical influenced melodies are filtered through the dance music energy of bassist Nick Blacka and drummer Rob Turner. Their instrumentation might be the archetypal piano trio but while the melodic, harmonic and structural ideas are influenced by both classical and jazz the rhythms are drawn from left field electronica and it’s this meeting of opposites that makes their unique acoustic-electronica sound so exciting and creates such an interesting and emotionally rich palate for the listener  – as drawing on a heady brew of influences from Brian Eno, John Cage and Squarepusher to Manchester’s grey rain-streaked urban streets they create a brave new sound all their own.

“It’s obvious why the Manchester clubs are jumping to this band.” The Guardian

“Jazz, techno, hip-hop and dubstep are glimpsed here, but for all the looping motifs and dance floor vibes, this is the work of three sure-footed improvisers with deep jazz roots”. The Guardian

“[v2.0] showcases a group marking out their own musical world” The Times

“v2.0 has the potential to be one of those rare albums that genuinely resonates with an audience outside jazz” – JazzUK

“Anthemic riffs and skittering grooves..pushes the acoustic piano trio into the future” Jazzwise

“v2.0 is an energetic album… it takes classical and jazz rhythms and pushes them into the world of electronica”. Echoes

“v2.0 is the sound of a band moving forward… further establishing GoGo Penguin as one of the most exciting young bands on the contemporary scene” All About Jazz

“Sometimes an album stops you in your tracks. The brilliant jazz-meets-electronica release from this remarkable Mancunian trio, is one of them”. Spotify

“This music has all the hallmarks of 21st century Britain, an island afloat on an ever shifting sea of underground beats and rhythms”. Ancient to Future

“v2.0 could easily stake its claim as the most original and accessible jazz piano trio album of new music to emerge from these shores” – Marlbank