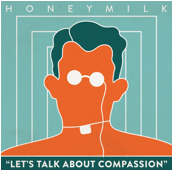 “Honeymilk are a band of many contrasts who have indie – reincarnated the Kinks. Plenty of other comparisons come to mind:  Wilco, Calexico and A Vintage Pavement.”- It’s All Indie

“Let’s Talk About Compassion’, a beautiful indie/rock song that reminds us of a blend of Wilco and The Strokes. This catchy song shows just where the compassion has gone, it has gone straight into their music.”- The Music Ninja

Honeymilk are an indie-rock act consisting of Marcus, Nikki and Erik. A blend between The Strokes, Ty Segall, Wilco and Velvets, the Sweden-based trio are about quality and energy alike. During their recording process, which took them only a few days to complete, the band had found numerous new ways to play around with various styles of music.

“We get inspired and capture sounds like frogs catch fireflies. We would never have used bongo drums a year ago”, says Marcus. Yet despite their all bets are off attitude, the band remained true to the core of their sound.

Led by Erik’s thumping drums and Nikki’s hooky guitars, their sonic rawness is beautifully topped with Marcus’ vocals that draw parallels to Julian Casablancas. In other words, Honeymilk’s Let’s Talk About Compassion is melodic and invigorating yet full of confined energy, and it will be available for sale and download 28th October 2014.