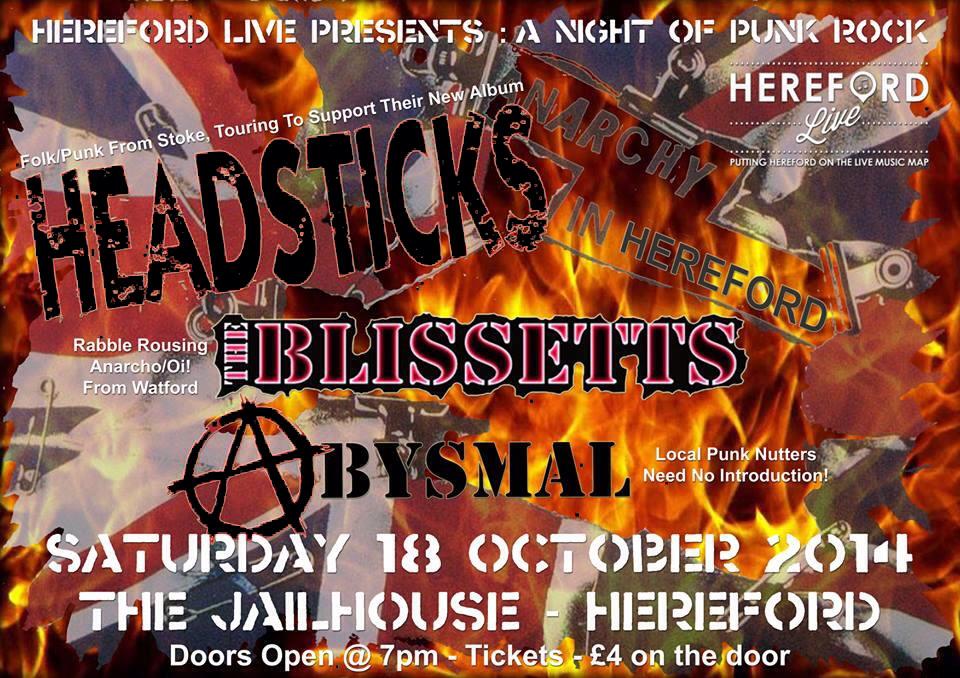 All the way from Stoke on Trent, headlining the evening we have the fantastic folk/punk band Headsticks. The gig is part of UK tour in support of their debut album “Muster”. With anthemic choruses, barbed lyrics, and infectious melodies their sound embodies punk ethics combined with a folk style delivery, a fantastic live band you won’t want to miss.
http://www.headsticks.co.uk/

Opening up the evening are Herefordshire’s very own “punk nutters” Abysmal.
https://www.facebook.com/PunkAbysmal

The punk ethics of the evening is set to cater for all, from the acts and their punk roots, to their attitude to their projection. This night is set to unite all music lovers, with all music tastes. An unmissable evening in Hereford.

To get us all in the mood of the event, we are thrilled to spend some time with each of the acts, from homegrown talent Absymal to the touring acts The Blissetts and Headsticks.

In the third and final special Hereford live installment we speak to headliners Headsticks to get us all in the mood for this must see show.

Before we get to the details of your forthcoming live appearance at the Hereford Live’s Anarchy in Hereford show, We want to get to know more on you. Please introduce yourselves and your role within the band- How long have you been playing and performing live?

I am Andrew, singer ( in my own little way), Harmonica player (ditto)…..and songwriter with Headsticks…..oh, and usually driver too!….I’ve been paying with bands for about 15 years now….seems like yesterday!!!

The need to be loved really…..still waiting for this to happen!!!!

How did you form and where did the name come from?
We formed late 2012, basically myself and Doon had been working on a few songs and playing a few support slots….Nick the bass player (and also a sound engineer) was doing our sound at a gig and asked if we were looking for other musicians, which we were, so he jumped on board! We then stole Tom the drummer from Doon’s other band ( mainly to bring down the average age of the band as he’s only a pup!)…..we’ve just recruited a fifth Headstick)….his first gig was last night and all went well! As for what the band name means, well, we wanted something with a local angle….Stoke is known for pottery and coal….there were no decent pottery terms which hadn’t been used, though for a very short time we considered The sagar makers bottom knockers ( that was an actual job in the pots years ago)….so settled on Headsticks, which are the supports from the winding gear at the top of the pit entrance in the coal mining industry….
How would you personally describe your own sound in one word?

I tend to witter on to introduce each song, what it is all about and hopefully to engage the punters, I’m pretty in your face really without being to confrontational…..I want people to think about what we have to say, but want them to feel as though they’ve had a belting night too, uplifted and hopefully they’ll embrace what we stand for….
What is it that you personally get from your performance?
There’s no better feeling than seeing people singing one of your own songs back at you…it makes all the graft worthwhile and just gives you a buzz unlike any other.How would you describe the reception to your presence?
Generally very positive….people tend to get what we are about very quickly and we make friends easily as a result….

‘You’re killing me America’ tends to get me wired…. And it’s a song I can’t help belting out, no matter how I try to be a little reserved, I just have to give it some nuts!

Is this the first time you’ve teamed up with Hereford Live?

Yes, it is, but hopefully not the last!

What are you looking forward to most about the HL Anarchy show and what can we look forward to from your live performance that night?

Hoping for a decent crowd, great sets from all 3 bands and if just one person comes to me and says they’ve had a great night, or feels inspired then that’s good enough for me….as for our performance, well, it’ll be raw and honest and full off integrity….passionate and heartfelt as that’s the only way we know really.

Are you planning anything super special for this visit to Hereford?

As things stand, nothing special as we’re just bedding in our new guy Phil, but as he’s now settled in we may drop in a new song or two if rehearsals go to plan….but that’s not set in stone, if there’s something ready then we’ll do it for sure!

We’re doing a handful of Autumn dates, all very different and all on paper good looking shows….but we’re working heavily on a bigger run of dates for Spring before hopefully nailing a chunk of Summer festivals…..so many gig offers are coming in for next year and we’ve already agreed a few festivals including a couple of decent looking headline spots! Hopefully a second album at some point next year, with recording starting on that later this year….We’ll hopefully just keep on doing what we do, making new friends, and making decent music in our own little way!

Just that we had a grand time and even better reception when we played  ‘Down on The Farm’ in the Summer, and are looking forward to meeting up with Rich again at this gig….great to be part of it and really looking forward to hearing both Abysmal and The Blissets and hopefully meeting loads of like minded people who’ll hopefully have themselves a top night of folk’n’punk’n’rock’n’roll……let’s do this, an evening of musical disobedience!!!!!

A huge thank you to Andrew be sure to check out all three of our gig preview interview specials, get excited and save the date for this unmissable hometown show.

Greys Release Video for “Adderall”, UK/EU Tour with Death From Above 1979 Starts This Week‏