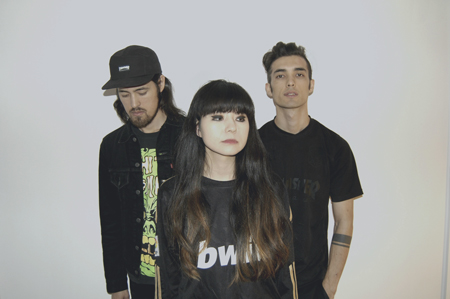 ‘NOWHERE EP’ out in December 2014 on Club.The.Mammoth

“A New York trio, the band’s output is grunge in the sense of fusing fuzzed out guitars with candy-bar-sweet melodies. Oh, and noise – lots and lots of noise” – CLASH

Following the release of a few infectious singles, Brooklyn-based doom/blues trio GHXST return with the release of ‘Nowhere EP‘ in December through Club.The.Mammoth.

The EP has been recorded over the last year between New Orleans, Nashville and Brooklyn. Even though the band’s characteristic doomy/grungey sounds of their first releases are all there, Nowhere EP also shows a more ethereal and grounded side to theor music.

The first track to be taken off the EP is ‘Galaxia‘, a song that captures the band at their heaviest and most intoxicating, as singer Shelley X’s moody vocals echoes against a wave of droning guitars. ‘Galaxia‘ is released on 10th November 2014 on Club.The.Mammoth