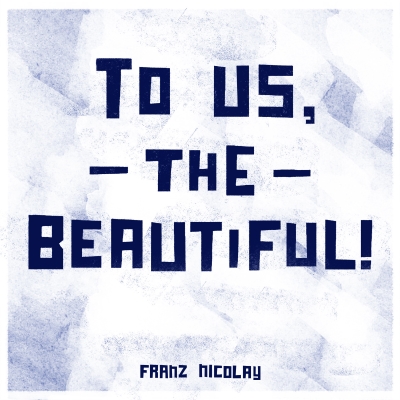 The wild and wonderful world of Franz Nicolay is once again in glorious ear-shot for those brave souls tempted to indulge. To Us, The Beautiful! is the anthemic follow-up to 2012′s Do the Struggle and will be released by Xtra Mile Recordings on the 19th January 2015.

Sample the delights of ‘Marfa Lights’ which is available as an instant grat:  http://smarturl.it/MarfaLights-Franz.sc

Renowned for his unique delivery and absorption of widely diverse styles, Franz has shared stages and/or songwriting time with The Hold Steady, New York gypsy-punks Guignol, and Against Me!, as well as recording with the likes of Frank Turner, The Living End, and The Dresden Dolls. With a whole heap of solo records and full-band recordings behind him, his latest is something that won’t be repeated: “If I make another record, it probably won’t be anything like this.” He could have said that about any record in his career, naturally. It rings true enough here though.

Taking its title from a rather lucid Ukrainian toast – “To us the beautiful, and to those who disagree, may their eyes fall out” – the album has far more of the joyous celebration than the dark acid tongue to it. It’s almost an atypical Franz record, as it stands right up against the catchiest guitar-pop records, in a way only Franz could muster.

In a mere 6 days of rehearsal and recording, with Andrew Seward of Against Me! on bass, Ara Babajian of Leftover Crack on drums, the NYC guitarist Yoni Gordon, and J. Robbins of the excellent Jawbox and Burning Airlines producing, To Us, The Beautiful! is bulging with hooks and elegant melodies. “Talk To Him In Shallow Water”, for example, has a beautiful banjo-picked melody line that’s fluid and refined yet harks back to the more ramshackle gamut that Franz usually runs. However, this is an exception, as Franz has brought an addictive strain of chiming and carving rock-and-roll. Listen to “Bright White” and you’ll feel yourself nodding in agreement.

Of course, Franz refuses to stick to one sound throughout and gallops, sidles and strides across his musical tastes as before – just with far more direct shots to the heart and soul than the esoteric form he usually takes. Whether the slow-burn wall of sound on “Everything Is Going According To Plan,” the almost doo-wop chorus of “The Pilot Inside”, or the reliable and satisfying chug, hue and cry of closer “Porta Fenestella”, the guitars are driving everything. They direct Franz’s literary-inspired lyrics and free-spirit vocals down turbulent and exhilarating channels, all flowing to choruses that won’t leave you for hours or days on end.

He claims a whole heap of inspirations that have left fingerprints on the record, a list that includes: the Waterboys, Leo Strauss, Ivor Cutler, Future Of The Left, a pet rat in Southampton, John Cooper Clarke, the Egyptian Book of the Dead and “other things (that) are in there too,” says Franz himself. Nevertheless, he promises that “you don’t have to go looking for them; you can take what you wish from it, obviously. I’m pleased if you like it. If you don’t, that’s fine too. It’s a big world.”

And with Franz in it, the world seems a whole lot wider than before.