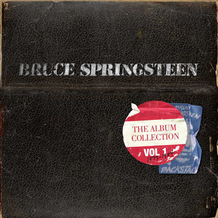 BOXSET INCLUDES REMASTERED VERSIONS OF FIRST SEVEN STUDIO ALBUMS ON CD OR LP
RECREATIONS OF ORIGINAL ARTWORK AND BOOK OF RARE MEMORABILIA AND PHOTOS
A group of fans were the first to enjoy an exclusive listen to the upcoming ‘Bruce Springsteen: The Album Collection Vol. 1, 1973-1984’ out through Columbia Records/Legacy Recordings on 17th November. The fans gathered in one of Bruce’s favourite record shops, Jack’s Music Shoppe in Red Bank, NJ, where they listened and compared the brand new remasters with the original recordings. Footage of the event and the thoughts of mastering engineer Bob Ludwig and Thrill Hill Recording audio engineer and longtime Springsteen audio archivist Toby Scott can be viewed here: http://smarturl.it/Springsteen_TH
‘Bruce Springsteen: The Album Collection Vol. 1 1973-1984,’ contains remastered editions of the first seven albums recorded and released by Bruce Springsteen for Columbia Records between 1973 and 1984. All of the albums are newly remastered (five for the first time ever on CD) and all seven are making their remastered debut on vinyl.
The seven albums are recreations of their original packaging and the set is accompanied by a 60-page book featuring rarely-seen photos, memorabilia and original press clippings from Springsteen’s first decade as a recording artist.
Acclaimed engineer Bob Ludwig, working with Springsteen and longtime engineer Toby Scott, has remastered these albums, all newly transferred from the original analogue masters using the Plangent Process playback system.
Albums included:
Greetings From Asbury Park, N.J. (1973)*
The Wild, The Innocent and The E Street Shuffle (1973)*
Born To Run (1975)
Darkness On The Edge Of Town (1978)
The River (1980)*
Nebraska (1982)*
Born In The U.S.A. (1984)*
*denotes first time remastered on CD
For more info about Bruce Springsteen and the E Street Band click here: