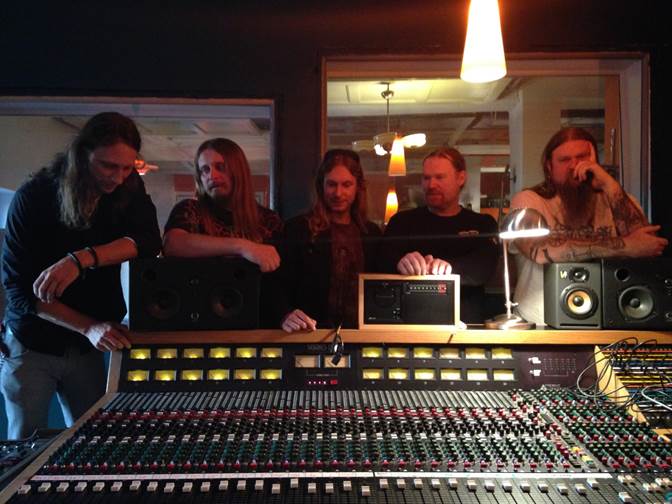 From his home in Bergen, Norway, ENSLAVED guitarist, songwriter, and founding member Ivar Bjørnson takes some time to provide the following update:
“My favorite time of year is whenever we enter the studio with ENSLAVED to record a new album. Now the season of creative madness, endless days, and bleeding fingertips is upon us again… O joy!  As before, it is the unholy trinity that forms the first line of attack: I (guitar), Grutle (Kjellson, bass & vocals), and Cato (Bekkevold, drums), are recording the foundations of the album live, while Ice Dale (lead guitar) and Herbrand (Larsen, vocals & keys) will add their instruments and voice in their own studios after these initial core sessions. Then I will add some wackiness at my home studio, before we all get together again to finish it.

“I feel that I have delivered basic material that is rock solid. I have poured my very life and heart into these compositions while the rest of the band have refined it, shaped it, and delivered it like their very lives depended on it. It has been challenging to keep up the pace with the way the songs wanted to go; life flows its ways and takes its turns regardless of your artistic ambitions. However, the music led the way through the fog and I just followed, and never doubting the oncoming album for a second.”

Additional experimentation and sonic exploration will be conducted deep in the woods of Valevåg south of Bergen where the band took a mobile studio to record the infamous “Thorn” 7” single in 2012.

The album will be produced by band members Ivar Bjørnson, Grutle Kjellson & Herbrand Larsen together with Iver Sandøy.  Mixing will be done by Jens Bogren at Fascination Street Studios in Örebro, Sweden.

Cover artwork will once again be illustrated by long-time collaborating artist and “sixth ENSLAVED member” Truls Espedal, who has painted all album covers since 2001’s Monumension.

For their 2012 studio release RIITIIR, ENSLAVED were nominated for a Spellemann Award (the Swedish equivalent of the American Grammy) for the seventh time in the category “Best Metal Album.”  RIITIIR appeared on numerous “Best Albums of 2012” lists around the world.