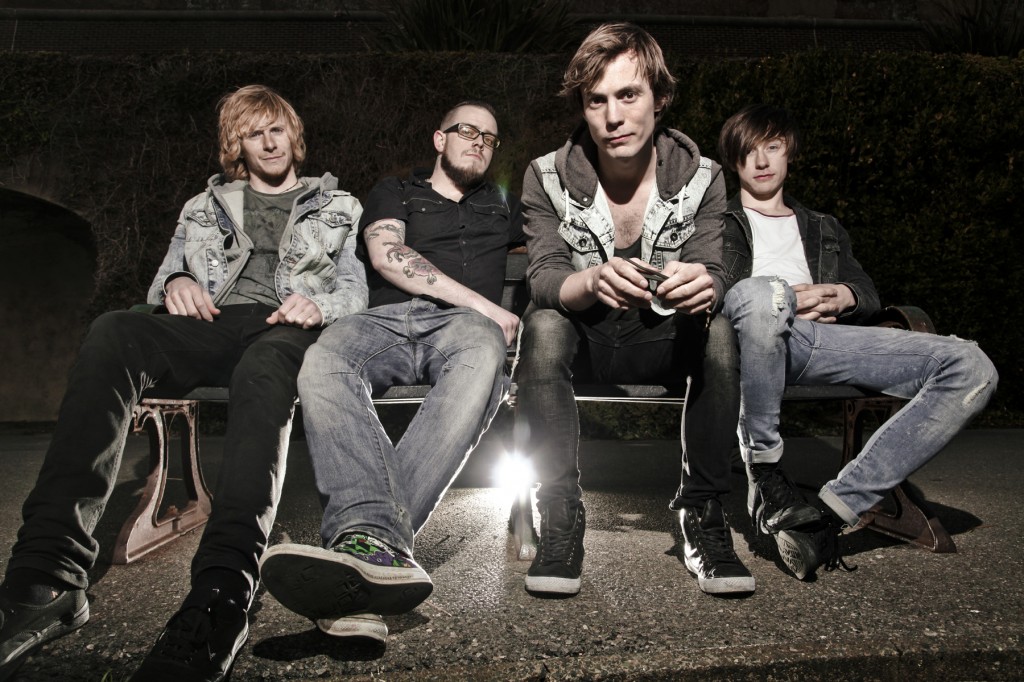 City Of Ashes unveil their new video for slow-burning ballad ‘Masks’, which can be seen here: http://youtu.be/w7W3G-033Dc.The release closely follows that of swaggering pop rock offering ‘Waves’. Both tracks are taken from their debut full length All We Left Behind, an assured assembly of mini anthems, produced by Matt O’Grady (You Me At Six, Deaf Havana, Your Demise).

“Our album is very personal,” declares Orion Powell, vocalist of the Eastbourne quartet; “Essentially it is a record of 18 months in my life, which could almost have been funny if they weren’t so tragic. At the beginning of the writing process I was experiencing tragedies on an almost weekly basis. Firstly, a close family bereavement; then a very rare auto-immune disease contracted by my housemate, affecting his lungs and kidney, left him hospitalised in total renal failure; then another bizarrely rare auto-immune sickness attacking my father’s central nervous system and hospitalising him in the US; All topped off by the end of a four year relationship: Each new tragedy seeming to compound the others. If I’d been writing the script for Hollywood I’d probably have deemed it too unrealistic.”

Any one of these events might leave a person shell-shocked and static, but Powell and his bandmates – guitarist James MacDonald, bassist Daniel Frederick and drummer Dan Russell – channeled life’s unkindness into their art, threading modern melodic alt rock majesty from misfortune. “I felt as though I had to start from absolute zero and All We Left Behind is basically the story of my trying to learn who I am and how I fit in to the cultural background in which I found myself,” says Powell; “It’s a story of recovery.”

Orion Powell explains their former single: “‘Waves’ is a story of my trying to wear a public face to protect me whilst I worked underneath to desperately try and let go of the bad things that had happened. It’s really a discussion of the gap between the face I was showing to the world and what was going on behind my eyes. The problem with being so desperate to let go, of course, is that by the very nature of the phrase you are not yet able to. That of course adds a huge wall of frustration which is another layer to the song. I suppose you could say that the song is a plea for the end of something and the start of something new.” Watch the official video here: http://www.youtube.com/watch?v=5_KpC_0oAXA

New single Masks can be found here: http://youtu.be/w7W3G-033Dc; with Powell explaining: “‘’Masks’ was a really turning point in the writing of the record, and it was written following a night I was dragged to a nightclub by friends trying to shake me out of my depressive state (as friends do),” Powell continues; “In their defense they succeeded; I ended up more than a little tipsy and having a good time in spite of myself. Then for no reason I can identify I had a bizarre moment of clarity. The room seemed to slow down and I snapped into sobriety. As I looked from person to person in the crowded room it felt as though I was looking at clones. Every guy was strutting around like a wannabe Alpha male, adhering to every lame stereotype of clothing, phrasing and even mannerism, in attempt to claw some kind of acceptance from his “bros” or any member of the oppose sex that would give them even a passing glance of validation. The girls were much the same story. All I could think was “what happened to our individuality?!” “Did I miss the memo that I had to buy a personality from Tommy Hilfiger now?” Although at the time I was still trying to get over my own tragedies and work out who I was, the one thing I knew for sure is I didn’t want to rent my soul from a designer shelf.”

www.facebook.com/cityofashesband
Single ‘Waves’ was released August 18th: http://www.youtube.com/watch?v=5_KpC_0oAXA
Single ‘Masks’ was released September 25th: http://youtu.be/w7W3G-033Dc
Album ‘All We Left Behind’ is out now