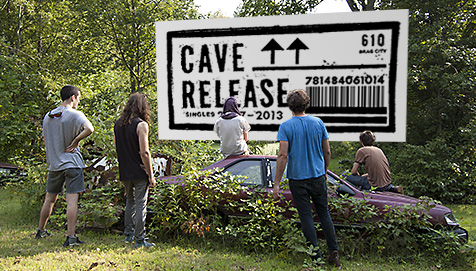 CAVE’s singles compilation Release is a melting pot of jams from their sweltering heart, songs that didn’t fit onto their three previous LPs and EPs. These care-free and exploratory songs have been recorded and transferred from various vintage formats such as four-tracks, eight-tracks and even VHS tapes – though never before released on LP.
Some of CAVE’s most clamorous and progressive freakouts can be found here, including a song from the Threace sessions that nobody has heard, and today you can listen to another essential cut from Release, “The Ride“
LISTEN TO “THE RIDE”

Like the best singles, CAVE’s sides here have singular qualities that songs on albums can’t, as they unwind themselves over 30 or more minutes in time. A couple of the tracks on Release rock more in contrast to the refined production of Neverendless and Threace.  As a standalone release this collection presents a true sense of CAVE’s proficient and zealous sound.

Track List:
Butthash (Harshmellow mix)
Bobbys Hash (feat. Bobby Conn)
JIM
Boneyard
The Ride
Party Legs
Thai I Am
Machines and Muscles
“Cave are all about churning grooves and ever-shifting scenery, their wonderful instrumentals disappearing around hidden corners and often re-emerging as something else entirely. Sweaty Fingers starts out with a taut rhythm, then gets all loud’n’lairy after settling into a cyclical guitar riff. Silver Headband morphs from German motorik to distorted metal boogie without leaving a join, while Slow Bern is a more ambient form of 70s kosmische. The interplay is frequently dazzling…At times, Threace feels like a postmodern vision of the history of popular music, from the funk-jazz wah-wah of Arrow’s Myth to the blazing psych-folk of Shikaakwa. Bloody marvellous, really.” – PROG
“The 12-minute “Sweaty Fingers” punctuates a trance-inducing James Brown vamp with Rush-style powerchord explosions before indulging in the most intense bout of palm-muting since Oren Ambarchi’s Sagittarian Domain…The payoff comes about a third of the way in, when the spirit of Foghat makes an unexpected appearance and everything goes boogie.” – WIRE
“Threace possesses a wholly immersive sense of itself, and a free floating kinetic energy that is out of step with most contemporary riff-based music. Its command of sonic hypnosis is all the more impressive considering its brevity. In emptying out the riff of its weight, opting instead for ambience and endurance,CAVE demonstrates just how vital the riff remains.” – QUIETUS
http://www.dragcity.com/artists/cave
https://www.facebook.com/cavechicago