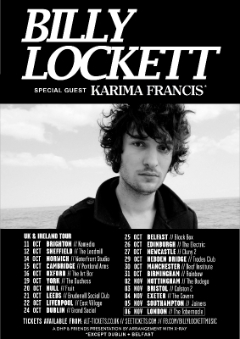 Billy Lockett’s brand new EP, ‘Old Man’, has seen him race up the iTunes Album Chart this week reaching no. 38, making him the only unsigned artist in the UK Top 100. He’s also reached no.5 this week on the Singer/Songwriter charts, just behind Ed Sheeran, George Ezra, Ben Howard, Jake Bugg and Passenger – a phenomenal feat and a testament to his ever-growing fanbase.

It’s no surprise that Billy has been picking up supporters across the country, including Radio 1’s Greg James, who premiered the title track last week, declaring the track as, “An absolutely beautiful new song from Billy Lockett, a guy I think is very talented.” No stranger to Billy Lockett, Greg James – along with Fearne Cotton, Dev, Scott Mills, Huw Stephens and Gemma Cairney – has previously supported Lockett’s emerging singles ‘Balance’ and ‘Pathways’ at the station.

In celebration of his deserved chart success, Billy Lockett will head out on his biggest headline tour to date. Commencing at Brighton’s Komedia on October 11th, the 21-date live outing will culminate at The Tabernacle, London on November 6th and support will come from the beautifully bold Blackpool singer/songwriter Karima Francis.

The tour has led to huge regional radio support for ‘Old Man’, which has been championed around the country by local stations, all falling in love with Billy Lockett’s gorgeous songs. ‘Old Man’ has now topped 100,000 plays on Soundcloud and fans are uploading cover versions of ‘Old Man’ to YouTube on an almost daily basis. They’re inspired by the beautiful animated video for the song, which is a touching ode to Billy’s father.