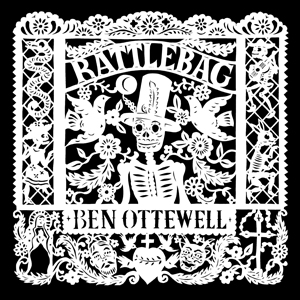 Rattlebag, the second solo album from the acclaimed singer and guitarist Ben Ottewell, will be released via Sunday Best Recordings on 8th December. The lead single from Rattlebag will be the albums title track, impacting December 22nd.

As a singer and lead guitarist in Mercury Award-winning rock band Gomez, Ben Ottewell is well known for his unmistakable voice and talent for blistering and inspired guitar solos. Rolling Stone declared, “Gomez’s not-so-secret weapon is Ben Ottewell.” And as GQ Magazine once wrote and anyone listening can attest, “his voice is not of this world.”

Ottewell released his first solo album Shapes & Shadows in 2011, described in a 4 star review in Mojo magazine as “rustic and folky in a gutsy, often heartwarming way.” Since then, Ottewell has been pleasing audiences with a series of successful solo tours across the UK, US and Australia.

On Rattlebag, Ottewell once again collaborated with childhood friend and his Shapes & Shadows writing partner Sam Genders, previously of Tunng. Simultaneously stripped-down and lush, the album is a collection of beautifully poetic tales of salvation and redemption, of sanctuary and braving rocky seas in search of distant shores. Ottewell’s infectious melodies and bluesy riffs will stick with you, and beg you to sing along.

Rattlebag is a record that transcends, appealing to Gomez fans for the recognizable voice they have come to love, and going beyond into a fresh new direction, evoking Americana and folk influences to create something that can be uniquely labelled as Ben Ottewell. “There’s a time and place for us / I will take you there,” he sings (Shoreline). On Rattlebag, Ottewell proffers hope and promise accompanied by sublime acoustic and slide guitars.

Ottewell embarks on a tour of Australia and New Zealand later this month, returning to the UK for a tour in December.