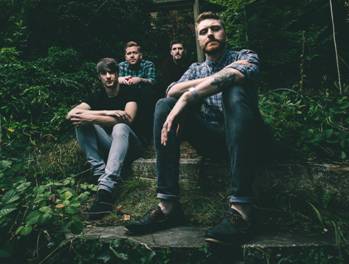 ANNOUNCE ‘THE BETTER PARTS OF YOU’ EP

REVEAL FIRST SINGLE ‘I PREFER YOU WAY BEYOND INIBRIATED’

Leeds 4-piece Bad Ideas today reveal details on their forthcoming EP ‘The Better Parts of You.’ 4 tracks blending parts of emo and elements of indie but all played with the conviction synonymous with rocks best, with singer Sam Cook’s voice full of playful melody throughout, a counterpart to what at times are self deprecating lyrics.

Having previously always included acoustic elements on their tracks, this latest EP is the first fully electric recording from Bad Ideas, it was ironic then, as the band took a more electric approach to writing, that they eschewed digital recording techniques in favour of Greenmount Studios in Leeds, creating the EP using their analogue systems recording onto 2 inch tape, Greenmount’s previous output having included The Cribs, Pulled Apart by Horses and Brawlers.

Bad Ideas had, in its original incarnation, been purely the solo project of lead singer Sam Cook and so ‘The Better Parts of You’ also represents Bad Ideas most collaborative output to date. Having previously brought on board additional members to the project in bassist Chris Coleshaw, guitarist Danny Neale and drummer Callum Connell, to flesh out the band at live shows and on previous albums ‘Murder of Gods’ (2012) & ‘Compromise’ (2013), the 4 tracks on this EP were written as a band, with individual members having the space to stand out on each track.

Bad Ideas tour Europe this year, with UK dates in the pipe line, they will head out on the road in November for 9 days taking in shows in Germany and Holland and playing shows with Joyce Manor and Cheap Girls on the tour.

Pharmakon live dates confirmed for April and May 2020, new album Devour out now on Sacred Bones