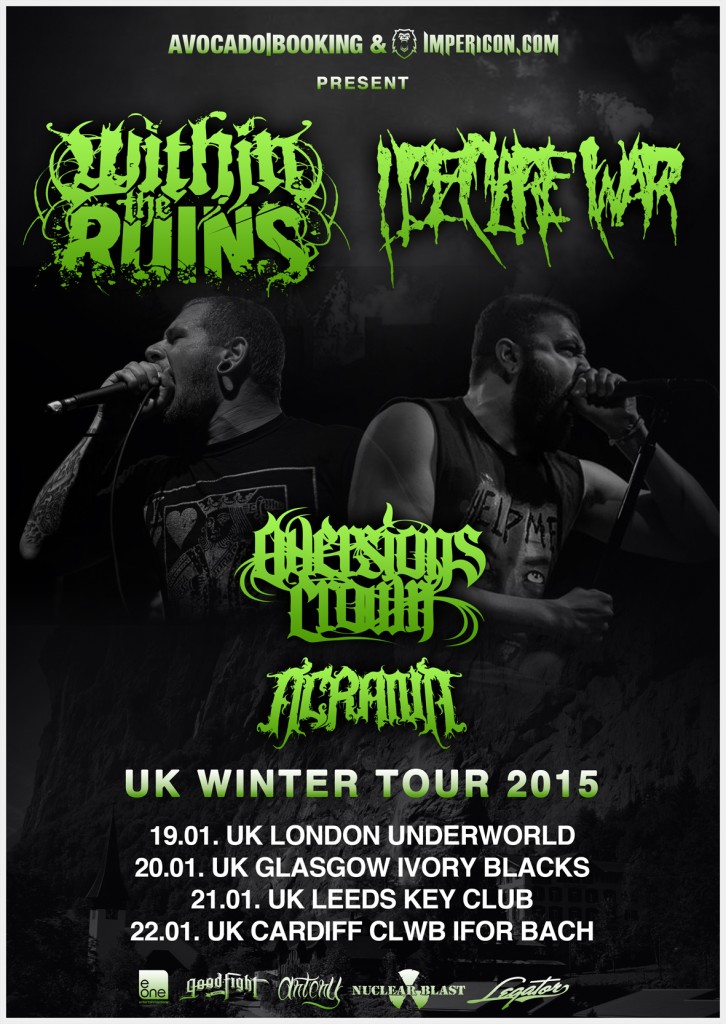 Brisbane’s six-headed death-core outfit, AVERSIONS CROWN, will unleash their live fury onto the UK this January with a string of dates starting January 19th.

The sextet will be supporting Massachusetts’ tech-metal core band ‘Within The Ruins’.
I Declare War and Arcrania will also be on the bill.

Aversions Crown proved they’re a force to be witnessed when they supported the mighty Thy Art Is Murder on tour in the UK spring of 2014. Metal Hammer praised their support slot noting the ‘use of three eight-string guitars, literally shaking the whole room with each bass-heavy drop.’

The January shows will be the first live chance for fans to experience new tracks from the bands soon to be released second album ‘Tyrant’.

Tyrant; the follow-up to the band’s 2011 debut Servitude was created in the oppressive heat of Brisbane’s summer with THY ART IS MURDER’s Andy Marsh producing and Mark Lewis (WHITECHAPEL, CARNIFEX) of Audio Hammer mixing. With a thematic fixation on dystopian nightmares and hostile extraterrestrial encounters, the relentless barrage AVERSIONS CROWN churn out across these ten songs will soundtrack either a solid Halo session or the coming invasion.

‘Tyrant’ will be released via Nuclear Blast on 24th November. Pre-order your copy here: http://smarturl.it/AVERSIONS-CROWN.

The striking artwork was created by Swedish visionary Pär Olofsson, who has worked with acts like PYSCROPTIC, ABORTED, ABYSMAL DAWN and THE FACELESS.