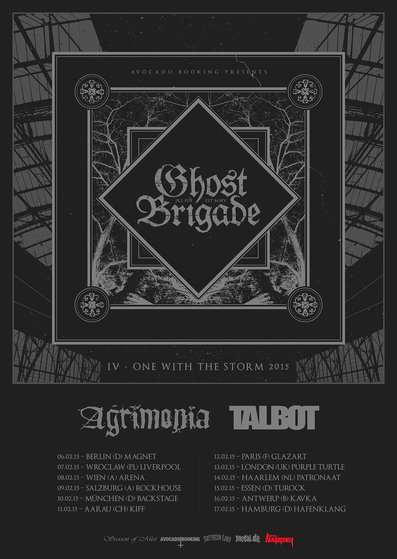 AGRIMONIA ANNOUNCE FEBRUARY TOUR DATES IN SUPPORT OF GHOST BRIGADE
Agrimonia have just announced their first European tour dates in 2015 (including one UK show), adding their heady concoction of savage crust/death/black metal and melancholic atmosphere to a tour with Finland’s doom-bringers Ghost Brigade and experimental rockers Talbot. Agrimonia (featuring members of other notable Swedish infiltrators including Martyrdöd, Skitsystem, At the Gates and more) have had a busy schedule since the release of their third LP, Rites of Separation (Southern Lord) last year – only last month did they undertake a tour which stopped off at Incubate Festival, while earlier in the year they tackled the notorious K-Town Hardcore Fest. The full dates, which start in February, can be found below:
TOUR DATES W/ GHOST BRIGADE + TALBOT
06.02.15 Germany Berlin @ Magnet
07.02.15 Poland Wroclaw @ Liverpool
08.02.15 Austria Wien @ Arena
09.02.15 Austria Salzburg @ Rockhouse
10.02.15 Germany München @ Backstage
11.02.15 Switzerland Aarau @ Kiff
12.02.15 France Paris @ Glazart
13.02.15 UK London @ The Purple Turtle
14.02.15 Holland Haarlem @ Patronaat
15.02.15 Germany Essen @ Turock
16.02.15 Belgium Antwerpen @ Kavka
17.02.15 Germany Hamburg @ Hafenklang
Agrimonia has lead a fruitful existence since their 2005 foundation, a steady diet of live appearances and European tours being an immediate part of the band’s ethos from day one. Their initial recording — a massive nearly hour-long undertaking — spread through the post-rock and crust legions, eventually seeing official release on European label Skuld Releases. Their follow-up LP, the 2010-released Host Of The Winged, released again via Skuld alongside a CD release on US crust/punk mainstays Profane Existence, the band traversed on American and Mexican soil for the first time with a brief but rampant West Coast North American tour.
Signing with Southern Lord mid-2012, Agrimonia bunkered into the studio over the turn of the year to record their label debut Rites Of Separation, the final product then mixed by mastermind Fredrik Nordstrom at infamous Studio Fredman (At The Gates, Opeth, Arch Enemy). With just seconds short of a full hour of material harnessed, the completed recordings boast the most mammoth and varied sounds in the band’s already diversified and expansive sound, their bustling slow-motion post-rock builds displayed with the most epic refinement. The band’s unconcealed crustpunk ethos and scathing elements shine through the pristine devastation, with elements of Summoning, Damad, Pelican, Opeth, Crisis, Bolt Thrower, Nausea and countless more shining within Agrimonia’s crushing, poignant and unique LP.
Agrimonia are also confirmed to play Desertfest 2015, alongside Black Cobra, Noothgrush, Sleep and more. If you have any press enquiries regarding Southern Lord, i’d love to hear from you.
PRAISE FOR RITES OF SEPARATION:
“Takes us through a murky world where crustpunk cliches are stretched to breaking point by being infused with atmospheric Norwegian black metal and a juggernaut stomp that sounds like Bolt Thrower in a particularly regal mood… well crafted and dynamic.” – TERRORIZER  [4/5]

“Challenging the boundaries of Scandinavian metal cliches… In the shapeshifting atmosphere, brittle piano and flaying riffage of outstanding highlight ‘Hunted’, the band are almost peerless.” – KERRANG [4K]
“By sounding like a collage of their vast array of influences, Agrimonia have ended up making a record that sounds like nobody other than themselves; a rare feat indeed.” – STEREOBOARD [4.5/5]
“Inventive riffs, time changes, harsh vocals, excellent Nordstrom production and an almost Maiden-esque gallop in places.” – SLUDGELORD
http://agrimonia.info
http://www.southernlord.com
https://www.facebook.com/SLadmin
http://twitter.com/twatterlord