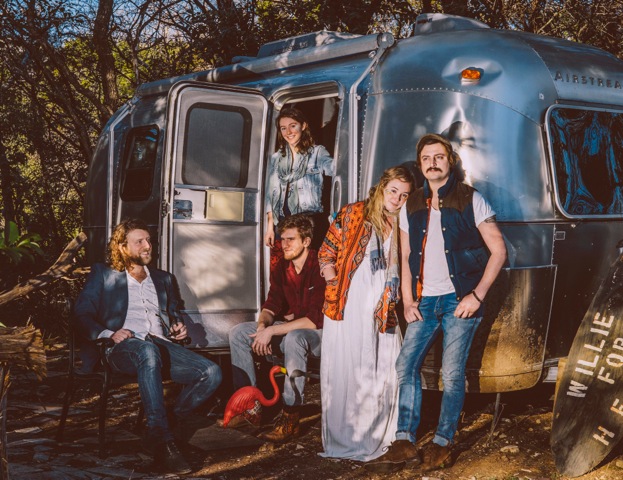 Or watch a live performance on The Late Late Show With Craig Ferguson here http://youtu.be/rMYpUEJVj94

The Runaround is the debut UK release for Austin, Texas six-piece Wild Child. Produced by acclaimed solo artist and fellow Austin resident Ben Kweller and released on his label, The Noise Company, The Runaround’s blend of folk, pop, indie, and gypsy melodies make Wild Child sound like nobody else. Together since 2010, Wild Child have broken through as one of the preeminent bands in one of the most storied music cities in the world, winning back-to-back honors as the city’s Best Indie Band at the Austin Music Awards.

Wild Child’s co-frontwoman Kelsey Wilson has “the voice of a Jazz Age Broadway baby, all coos and hiccups and shivers” (NPR). Among unanimously illustrious praise from the likes of Paste Magazine, Relix Magazine, The Chicago Tribune, Indie Shuffle, The Austin Chronicle, and American Songwriter, the Austin American­Statesman anointed Wild Child as “Austin’s next breakout act.”

Already released in the US, The Runaround earned Wild Child a place in NPR’s Top Ten Songs of 2013 for the Living Tree, and saw five additional songs hit number 1 on Hype Machine’s Popular chart.  Their Spotify, Soundcloud, and YouTube streams have eclipsed eight million listens. The lead single from The Runaround, Crazy Bird, debuted on Specialty Radio at number one.

With The Runaround, Wild Child worked with Ben Kweller – who was nominated for a Grammy in 2013 for his most recent album Go Fly A Kite – as producer. Kweller was instrumental in harnessing the band’s youthful energy and bringing out the uniqueness of their music. Wild Child’s velvety melodies, storyline drive, and wry delivery mark them out as a band of uncommon character and narrative reach.

Wild Child have toured extensively this year in the US, playing stages as major as Austin City Limits Music Festival, Wakarusa, Firefly Music Festival, Bonnaroo, Osheaga, and Savannah Stopover. Ahead of The Runaround’s UK release Wild Child will visit the UK for their first headline tour: